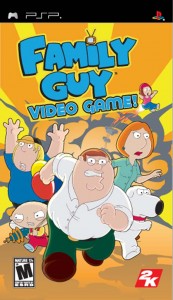 Family Guy on the PSP currently runs for $19.99 at Gamestop, but can be found as frugally as $9.50 brand-new at Amazon.

Over the past decade, the uber-popular Fox adult cartoon, â€œFamily Guy,â€ has become entrenched in pop culture, gaining a massive cult-following, spawning not only a made for DVD movie a few months ago, but also a video game. While few have voiced their grievances about the film, many will eventually become upset when they play the game on the PSP, finding a few major problems that have ruined a title that had a lot of potential.

Produced by 2K games and High Voltage Software, Family Guy on the PSP has some promise, but is basically a simple hybrid Stealth/Platformer/Beat-Em Up title that takes place in the Family Guy universe.

During the course of the game, players will have the opportunity to play as Stewie, Peter and Brian at various stages and will have to change their playing style with each character.

As Stewie, players must jump and shoot their way past their enemies [imagine a stripped-down version of Ratchet and Clank], while as Peter, gamers must beat up their opponents using strike moves and combos. Despite the fact that both of these elements of the game are enjoyable, they are some-what ruined by haphazard control, making it almost impossible to lock-on to enemies while playing with Stewie and even harder to perform combos with Peter, eventually making the game much harder than it actually is.

The only gameplay element of Family Guy that isnâ€™t ruined by the control is the stealth action part that features Brian, but even that mode has its problems. For instance, the only reason why Brianâ€™s part of the game plays smoother is because it doesnâ€™t rely on the player to button-mash. Instead, since players have to crawl through shadows in order to advance through the game, it focuses primarily on the analog stick and moving Brian about. Despite the solid controls however, the patterns of the enemies are way too predictable, making Brianâ€™s portion of the game pass by before the player can truly enjoy it.

However, on a positive note, the game features the voice talents of all the actors on the show and is completely engulfed in the Family Guy aura. The game also has some solid looking cut-scenes and in-game cel-shaded graphics that many fans of the show will without a doubt find freakinâ€™ sweet.

For these reasons, hardcore Family Guy aficionados will feel like theyâ€™re playing through a one of a kind episode of the show and will find something to enjoy in this title. Everyone else however, will find the gameâ€™s sub-par control and lack of challenge too frustrating to endure.