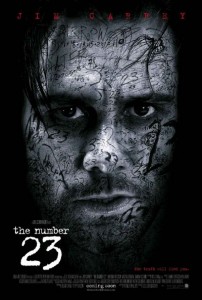 However, after watching it, itâ€™s obvious that while it seems to be inspired from the success of other films in its genre, the way it achieves its success makes it completely original and equally as entertaining.

Known for years as a comedic actor, Jim Carrey [The Majestic, Batman Forever] has proven time and time again that he can do a lot more than make people laugh. In â€œThe Number 23,â€ Carrey plays the protagonist, Walter Sparrow and does an amazing job of portraying a normal every day Joe, to only find out his world is nothing like it seems.

Helping create that notion of disbelief are both Virginia Madsen [Sideways, Dune] and Danny Houston [The Aviator, Marie Antoinette]. Madsen plays the concerned wife, Agatha, who stands by her husband during his horrific self-discovery and Houston is the suspiciously-concerned friend. Together with the stellar performance by Carrey, â€œThe Number 23â€ has the talent on-screen to survive and entertain.

But like most films Schumacher directs, that doesnâ€™t necessarily mean the movie has the luster and polish to be enjoyed by the masses.

Fortunately for Schumacher, the plot of â€œThe Number 23â€ is well thought out, witty and is soaked with charisma. Seeing Carrey transform into an obsessed lunatic because of a book, to only see his whole world change because of it is an amazing experience that any fan of thrillers like â€œSevenâ€ will surely enjoy.

Throughout the film, while Carrey is obsessing over this number and what its purpose is in his life, the viewer seeS that the number appears everywhere, in license plates on the cars passing by, on the clothes worn by extras, even on billboard signs, giving this huge conspiracy theory the biggest focus of the film.

The successful way that Schumacher and cinematographer Matthew Libatique [Gothika, Inside Man] manage to incorporate the theory in every facet of the film is what makes the story one of the biggest reasons for its overall success.

By the end of the film, one thing becomes apparent; this role was tailor made for Carrey. Utilizing his humor early in the film on a toned-down scale makes him a believable character and makes his plummet much more shocking and entertaining. Fans of his work may be a bit apprehensive to watch the film because they see Schumacherâ€™s name in the directors credits, but have no fear, even he can surprise us once in a while.