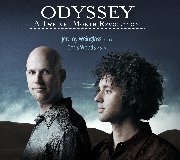 Pianist Jeremy Weinglassâ€™ ambitious album â€œOdyssey: A Twelve Month Evolutionâ€ is a project dealing with the experimentation of Jazz in a planned construct of the changing seasons. The single â€œJuneâ€ is the mid-point of this conceptual piece of musicianship.

â€œJuneâ€ is an emotional track which successfully burrows its way into your soul and consciousness. Wineglass sets the tone with a slow languishing melody that allows Chris Woodsâ€™ violin an opening to heighten the passionate pitch of this song. Itâ€™s nearly indescribable as â€œJuneâ€ is a track that is felt and experienced more than heard. If youâ€™re in pain, it amplifies it. If youâ€™re the least bit happy youâ€™ll soon enter into a state of rapture. Essentially this song speaks to you on a level which moves beyond the ego and delves into places where you dare not look. For a track that is barely two minutes long it packs a mesmerizing punch where youâ€™ll be clamoring to get your hands on the entire album. Imagine what the rest of the months sound like since â€œJuneâ€ is so extraordinary.