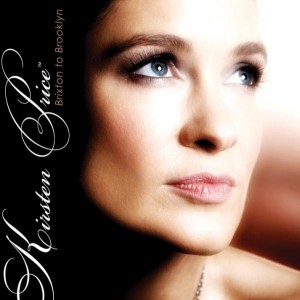 Kristen Priceâ€™s Brixton to Brooklyn is a fantastic album consisting of nine tracks, two featuring Len Xiang, and spans the musical genres of R&B, dance, rock and pop. Priceâ€™s sound is a cross between Lucy Woodward, Liz Phair, Katy Perry, Kylie Monogue, and even at times, a young Roxette.

The first track, â€œWith or Without Youâ€ is a pop-rock song with a great hook hooks, a catchy chorus, and a positive message for strong women. Itâ€™s a fun sound and packs a punch in terms of a cool rhythm. â€œGive that Girl,â€ also follows in track oneâ€™s footsteps, with the exception of a flirty modern pop chorus, and power vocals which bring Roxetteâ€™s early 80â€™s sound to mind.

Price also offers some great ballads on the album including, â€œMoving Onâ€ and â€œGone.â€ Both songs showcase Priceâ€™s ability to work a ballad and convey the emotion as well as passion that needs to be present behind the lyrics. Both tracks are heartfelt and also exemplify an awesome chorus with an R&B touch. These songs are hit material, respectively.

â€œBroken,â€ one of Priceâ€™s best on the album, is also an inspiring R&B pop song with a positive message, proving that Price isnâ€™t in the business for the fun of it; she has something genuine to say, and does not disappoint with this track. A great song to play when your down with positive energy and lyrics, â€œbroken wings will learn to fly again.â€

Price will also have you getting up to dance with this album. â€œTake Me to the Topâ€ begins with an electric guitar rock sound fused with a danceable up-tempo beat you will want to blast in your car. Continuing with the â€˜girl powerâ€™ messages, â€œOne More Timeâ€ is another dance track with fierce lyrics and Priceâ€™s vocal ability in full swing.

Len Xiang is also featured on two tracks-â€œLet Your Light Shineâ€ and â€œPress That Button.â€ Both songs bring the hip-hop R&B flavor, thanks to Xiang, as Priceâ€™s fans will think Kylie Monogue when she comes into the song. Both tracks are fun, club-type songs with up-tempo beats and a great soprano sound.

Price has a song for everyone and anyone on this album. She will certainly make a fan out of those who listen to her music. Overall, her vocal ability soars, proving that Price can make a name for herself in the business, and is most likely hear to stay.