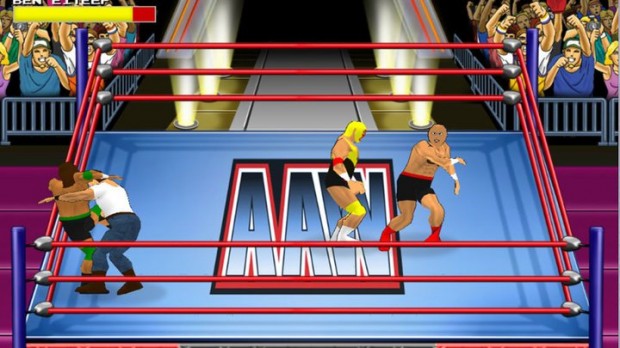 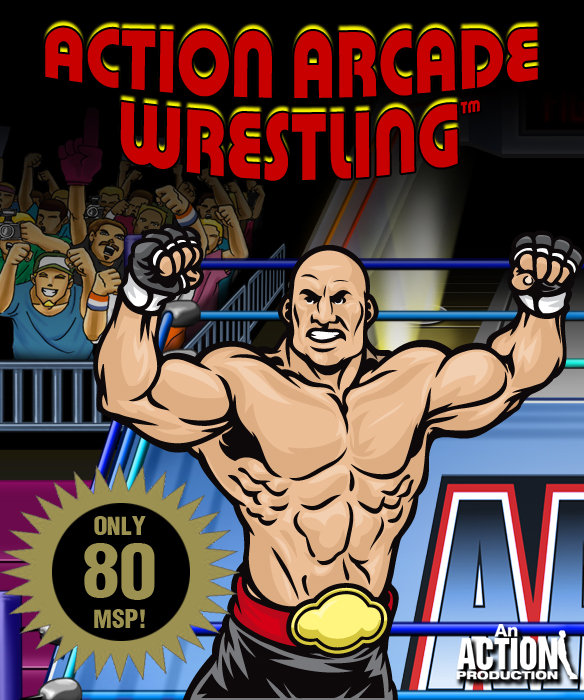 When did wrestling games get so complicated? With hundreds of moves, dozens of arenas, wrestlers and match types in every grappling title this console generation, gamers can sometimes get lost in all the options.

Even worse, they can allow that plethora of options to make up for a game that is plain mediocre.

Back in the â€˜80s, wrestling games on the Nintendo Entertainment System were all about button mashing. Sure, they were 2D and lacked the bells and whistles of todayâ€™s titles, but they were ultimately fun.

With all the repetitiveness of the WWE games and the lack of a new next generation TNA game today, wrasslinâ€™ gamers out there could use an alternative that is simply enjoyable to play.

Action Arcade Wrestling, an indie title on the 360 Live Arcade, is just that. A tribute to wrestling games of the eight-bit era, this title is surprisingly polished and most importantly, enjoyable.

Did we mention itâ€™s only 80 Microsoft points too?

Pound for pound, AAW is one of the best games on the Indie Game section of the X-Box Live Arcade. Unlike so many others that have blaring weaknesses, AAW hides them well and makes the experience retro and shockingly provides enough edit functions to make the game your own.

While there arenâ€™t many moves in the game, there are enough to recreate several big name stars and have your very own dream matches.

Yes, we know what youâ€™re thinking. Yes, you can create â€œThe Macho Manâ€ Randy Savage. His flying elbow drop is in the game, as well as several of the other moves he used in his career.

With the ability to edit the wrestling rings as well, this game gives the player more options than ever before for just 80 MS points. Stealing a page out of the book of the PS2 cult-hit â€œFire Pro Wrestling,â€ AAW is all about easy control and just enough user creativity to keep you interested.

With several different gameplay modes, such as Battle Royal, Single, Tag, Steel Cage and Iron Man, with up to four-players going at once, the fun doesnâ€™t have to stop for a while.

Graphically, the game is reminiscent of an episode of â€œSouth Park.â€ The wrestlers faces, in particular will remind you of your favorite adult characters from the show. As far as the overall look goes, think â€œMegaman Powered Upâ€ on the PSP, as a strong 2D perspective is being pushed, but with enough 3D accents to spice up the visuals.

While itâ€™s far from award winning, itâ€™s colorful enough to bring this world to life.

On the gameplay front, AAW plays and sounds like a combination of the original WCW title on the old NES. On the whole, itâ€™s essentially punches, running attacks and grapples, but as the game goes on, your attacks will get stronger and more moves become available to use. In the beginning of the match, youâ€™ll execute everything from chops to body slams. Later on, youâ€™ll get a chance to deliver bone-crushing maneuvers like DDTs, neckbreakers and even chokeslams and powerbombs. By the end of the match, itâ€™ll be time to execute your finishing move. Here is where AAW shines. Moves such as the Angle Slam and Canadian Destroyer are in the game as well as time-tested favorites like the Diamond Cutter, Scorpion Deathlock and Pedigree. This makes wrestling as your favorite stars simple and fun.

Itâ€™s also a nice way of getting around not having an official license.

There are drawbacks to the fun though. For instance, there are no reversals in the game and at times, the collision detection is a bit off. There are also times where itâ€™ll be impossible to pin your opponent, especially if theyâ€™re close to the ropes. Even worse, after several hours of gameplay, itâ€™s still unclear how gamers can get to the top rope on the two bottom corners to perform aerial maneuvers. Climbing out of the steel cage is a problem too. When wrestling the computer, this can be a problem, especially if you have the difficulty jacked up.

But with three of your friends, itâ€™s a blast and will force you to deliver punishment in other ways.

As a result, â€œAction Arcade Wrestlingâ€ is a blast in a multi-player setting and a fun diversion by your lonesome.

In the end, while it may not make you want to scream â€œoh yeahâ€ like â€œThe Macho Man,â€ but itâ€™s far from a waste of money and time.