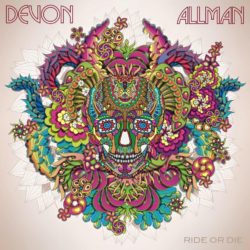 Review Fix chats with singer/songwriter and guitarist Devon Allman, who discusses the creative process and goals for his new album â€œRide or Die,â€ currently topping the iTunes and Billboard Blues charts.

Recorded at Nashvilleâ€™s Sound Stage Studios and Switchyard Studios this past May, it found Allman and an exceptional cast of musicians — Tom Hambridge (drums/co-production), Tyler Stokes (guitars), Steve Duerst (bass) Ron Holloway (saxophone), Bobby Yang (strings) and Kevin McKendree (keys) — locked in a creative chemistry that honestly invokes the need for faith and persistence in precarious times. Having composed or co-composed all but two of its songs, Allman eloquently expresses what it means to be human, while staying true to his muse, regardless of where it leads him. On songs like the solid, steadfast opener â€œSay Your Prayersâ€ or the brittle and bite of â€œGalaxies,â€ he invests his blues-rock traditions with a modern sway and savvy. â€œBlues was born down South,â€ he says, â€œAnd itâ€™s a massive part of the culture. But blues is a very open entity in my mind.â€