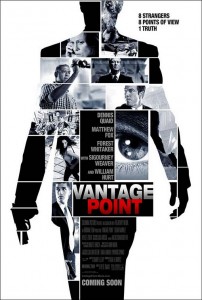 When the same story is told eight different times through the eyes of eight different people, one expects the story being told to be filled with plenty of opinion, back story and detail.

â€œVantage Point,â€ however, directed by Pete Travis, who makes his big-screen directorial debut, lacks the feel of a film that attempts to pull off such a daunting task. Nonetheless, the film is still an entertaining watch and proves to be the movie that relights the star-power fire of Dennis Quaid, while giving Matthew Fox the versatility to be taken seriously in different types of roles.

In 2006, â€œBabel,â€ a film starring Brad Pitt and Cate Blanchett, was released and took a similar path as this picture. However, director Alejandro GonzÃ¡lez IÃ±Ã¡rritu was able to make each segment and narrative of the film feel different enough to captivate the audience and fill in the gaps of the story. What â€œVantage Pointâ€ does is simply rehash the same story and provide a few more details than the last person was able to reveal. This slow-moving plot that ends with a happily-ever-after ending isnâ€™t exactly going to win Travis any awards. Regardless of that, however, there are a few ingredients in the filmâ€™s clam chowder to make you reach for your spoon.

Quaid (â€œFlight of the Phoenix,â€ â€œEnemy Mineâ€) does a great job as Thomas Barnes, the jittery Secret Service agent with something to prove. If his subtle demeanor wasnâ€™t enough to capture his cool, laid-back type of bravado, his wit and ability to clothesline people and exhibit Al Unser-like driving skills will. Simply put, this role is something new for Quaid, but that doesnâ€™t necessarily mean itâ€™s a bad thing for him. He pulls off the never-say-die action hero better than actors half his age in this film and is one of the best reasons to see the feature.

The same can be said for heartthrob Mathew Fox, whoâ€™s known for his role on the TV mega-hit, â€œLost.â€ Already armed with killer-good looks and a charisma that was probably responsible for landing him the role, Fox does a more than solid job as agent Kent Taylor. Rather than spoil the plot, letâ€™s just say that Foxâ€™s role definitely will shock fans of his work on â€œLostâ€ and will cast him in a different light in the future.

Add in solid supporting roles by Forrest Whitaker (â€œGhost Dog,â€ â€œThe Last King of Scotlandâ€) and Sigourney Weaver (â€œGhostbusters,â€ â€œAliensâ€), and you have a cast that is capable of delivering a quality film. However, the talent in the film far outweighs the sum of the films parts, as the story isnâ€™t nearly as deep and multilayered as youâ€™d expect it to be, making it an adequate 90-minute experience, rather than a breathtaking one.