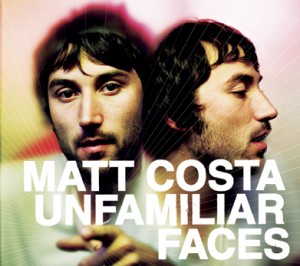 When former skateboarder and Huntington Beach, CA native Matt Costa released his first album, â€œThe Songs We Sing,â€ in 2005, music lovers looking for this generationâ€™s James Taylor or Jim Croce jumped for joy. Passionate, mellow and inspiring, Costa first album was a rag-tag compilation of songs, that could be listened to from start to finish. With tracks like â€œSunshine,â€ â€œAstair,â€ â€œMy Sweet Rose,â€ â€œCold Decemberâ€ and â€œDesireâ€™s Only Fling,â€ there was no need to press the skip button. It was, without a doubt, one of the most compelling acoustic rock albums released in the last decade.

His new album, â€œUnfamiliar Facesâ€ however, doesnâ€™t quite live up the high expectations created by the success of his first release. Nonetheless, it is far from sophomore jinx. It just doesnâ€™t have the same levity that made his intro album so gratifying.

Drawing inspiration Johnny Cash, June Carter and the Beatles among others, Costaâ€™s sound is completely different than the type of music youâ€™d hear on the radio. His songs range in feeling and topic, but are mostly about his relationships with his friends and loved ones. This in itself isnâ€™t the type of music that many may find ultimately intriguing, but Costaâ€™s voice and catchy guitar riffs draw you in and itâ€™s almost impossible to not find something you like on the album.

One track on the album, â€œTrying to Lose my Mind,â€ will remind music aficionados of the Beatles version of â€œWith a Little Help From my Friends.â€ The Beatles influence doesnâ€™t end there either, as â€œMr. Pitifulâ€ also has a â€œLife Goes Onâ€ kind of feel to it. In addition, â€œEmergency Callâ€ has the feel of a Velvet Underground track teetering in between â€œSweet Janeâ€ and â€œTake a Walk on the Wild Side.â€ With that being said, â€œUnfamiliar Facesâ€ is not an album that you will be banging your head to. Instead, itâ€™s an album that would best be served in a coffee house in the West Village. Simply put, Costaâ€™s vocal range and soothing guitar riffs is the kind of music one can relax to. In a day and age where youâ€™d be hard-pressed to find serious acoustic musicians, Costa is still a breath of fresh air in a music scene encompassed with unoriginality and mediocrity.

The only problem is aside from the aforementioned songs, there is nothing that doesnâ€™t separate itself from the average. Thatâ€™s not to say that there are any really bad songs on the album, because even the worst song, arguably â€œBound,â€ is far from horrible, it just doesnâ€™t have the same sing-a-long characteristics that made Costaâ€™s first album so enjoyable.

In the end, while Costaâ€™s newest sacrifice to the musical gods is an enjoyable and listen-able one, it doesnâ€™t captivate and mystify. Instead, it merely suffices.