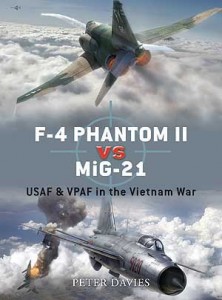 There are quite a few books out there about the air war over Vietnam â€“ and most of them utilize the same rehashed information from the early 90s, rely heavily on U.S. sources and tell very little about the Vietnamese side of events.

Peter Daviesâ€™ F-4 Phantom II Vs. MiG-21, however, does an excellent job of illustrating Â both sides of the cloudy history of the war torn skies above Vietnam.

This book is volume 12 in the â€œversusâ€ series by Osprey publishing. Each volume pits two equivalent pieces of military equipment against each other and explores their various merits and the tactics of the opposing sides. In this case, we get a peek at two of the most advanced fighter jets available to each side during the war — the U.S. Air Forceâ€™s McDonald Douglas F-4 Phantom II and the Vietnamese Peopleâ€™s Air Forceâ€™s (VPAF) Mikoyan-Gurevich MiG-21 fighter aircraft.

Considering this book is only 80 pages long and covers just two aircraft types out of dozens that fought in the war, Davies does a phenomenal job chronicling the air war.

Davies writes in a very clear, straightforward style that makes certain complex technical info- about radar and electronic warfare- very easy to follow. The most important aspect of the book is the large amount of data about the VPAF, which is missing from the vast majority of works out there. He goes into detail about capabilities of the MiG-21â€™s radar and weapon systems (again almost always missing) and the effectiveness of Vietnamese Ground Intercept Radar, which is often misunderstood and biased by cold war propaganda.

He explains quite clearly that while the VPAF played a relatively minor role in the overall war effort, it did fight extremely effectively and performed far better than what theyâ€™ve been given credit for in the past.
His coverage of the F-4 Phantom II is also excellent. While info on the F-4 if not hard to get, as itâ€™s one of the most documented aircraft around, he does add some refreshing insight on the aircraft.

Davies details the USAF usage of the F-4 which greatly varies from what the U.S. Navy did with it. He explains the terrible shortfall in US missile technology, how the AIM-9 Sidewinder and AIM-7 Sparrow missiles were barely acceptable (out of 612 AIM-7s fired only 56 scored kills) and that the AIM-4 Falcon was all but useless.

He also tells of how the USAF took an almost purely technical approach to the problem, trying to improve the Phantom and its weapon systems, rather than improve tactics.

Davies uses words, excellent photographs and diagrams to explain how air combat between the two jets evolved between 1967 and 1972. Newer versions of both aircraft came on the scene as the war progressed; better than earlier models (especially in the MiGâ€™s case) as did tactics. Vietnamese ground controllers developed new tactics to match superior numbers of US aircraft such as vectoring two MiG-21s on target to distract escorting Phantoms, while a third MiG sneaks up and picks off the last aircraft in formation.

This is by far one of the best books on the subject and is more than worth the $17.95 list price. Also included are brief yet thorough biographies on two famous pilots from each side for your comparison.
The only other book half as good is â€œClashesâ€ by Marshall L. Michell, although that is much larger and covers Â the entire air war.

If you want to learn how a small third world air force could hold its own against the most advanced aerial armada in the world, this is the book for you.