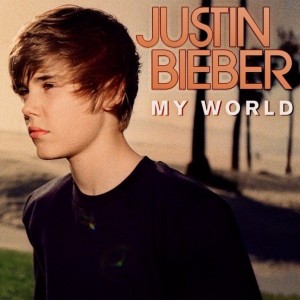 Justin Bieberâ€™s debut album My World will be dropping on November 17. Itâ€™s no wonder his fans have been clamoring for a multiple-song record from this artist. His music makes you move and is reminiscent of tunes that you listen to when you want to be in a good mood, or want background sounds that are un-intrusive.

Itâ€™s no wonder that â€œOne Timeâ€ is one of the four songs thatâ€™s climbing the billboard charts. It has that bubble-gum pop flavor that is infectious without being annoying. However, the auto-tune effect that is used throughout the song is unnecessary. This kid can sing and his vocal ability should be showcased more. Then thereâ€™s â€œFavorite Girlâ€, another pop-song that is riding the high wave of the charts. A-plus does a great job of writing lyrics appropriate for this 15-year old YouTube sensation.

As â€œDown to Earthâ€ shows Bieber can write too. Co-written with Jackie Boyz, the piano intro and heartfelt lyrics make you believe what heâ€™s saying. Itâ€™s another solid track that lets you know that he will be around for a long time.

However, â€œBiggerâ€ is a letdown as it doesnâ€™t stand up to the emotions of the previous tracks. By the listen of this song Justin Timberlake should stick to writing his own tracks and not venture out in writing for younger artists.

The album gets back on track with â€œOne Less Lonely Girl.â€ The overlaying harmonies alongside the music arrangement make this another infectiously good track. Ezekiel Lewis and Balewa Muhammad know how to capture mature-teenage love in their writing. They should have worked on the â€œBiggerâ€ track. One could imagine what they would have done with it, since â€œOne Less Lonely Girlâ€ is one of the best off the album.

â€œFirst Danceâ€ guest starring Usher gives this song an R&B kick. Although if Usher wasnâ€™t on this record, it still would be a solid track, as Bieber knows how to use the maturity of the lyrics and his voice to his advantage. The song comes off as an intense first love and not a vulgar bump-and-grind.

â€œLove Meâ€ is a great way to end this album as it leaves you clamoring for more, since it encapsulates all the good parts of the previous tracks.

With the second part of this album being released in February 2010, fans of Justin Bieber will have to be satisfied with this nicely done EP.