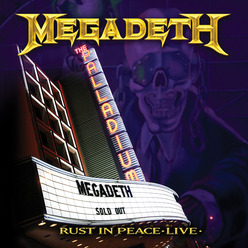 â€˜RUST IN PEACE LIVEâ€™ BLU-RAY, DVD AND CD, TO BE RELEASED SEPTEMBER 7 ON SHOUT! FACTORY

The final night of Megadethâ€™s historic month-long Rust In Peace 20th anniversary tour has been captured for the upcoming Rust In Peace Live Blu-ray, DVD and CD, due out September 7 on Shout! Factory. On March 31, 2010, at this incredibly special show at the legendary Hollywood Palladium, not far from where Dave Mustaine formed the band in 1983, Megadeth played their landmark, genre-defining 1990 Rust In Peace album in its entirety, in addition to other Megadeth favorites. Rust In Peace Live also marks the return of original bassist David Ellefson (Megadeth 1983-2002) to the iconic multi-platinum group after eight years. Ellefson (bass), joins Mustaine (lead vocals, guitar), Shawn Drover (drums) and Chris Broderick (guitar).

Megadeth founder/frontman/guitarist Dave Mustaine explains, â€œWe are pumped to be able to share the RIP Live concert with you all around the world. The anniversary and David Ellefson coming back was better than a facelift and a bottle of Viagra for old Vic.â€

The 80-minute Rust In Peace Live DVD (5.1 Dolby Surround 16:9 Widescreen) and Blu-ray (5.1 DTS Master Audio 1080p High Definition) were directed by Kerry Asmussen (Green Day, Jay-Z, Coachella). The DVD and Blu-ray will also include behind-the-scenes footage, including a rare glimpse of the band rehearsing in their dressing room as they prepare to take the stage.

Rust In Peace is considered one of the best metal albums of all time by fans and critics and debuted at #23 on the Billboard Top 200 Album Chart in the U.S. and #8 in the U.K. The album showcased a much tighter sound, with Mustaine’s writing style adopting a rhythmically complex progressive edge, prompting All Music Guide to cite Rust In Peace as “Megadeth’s strongest musical effort.â€ The album received Grammy nominations in 1990 and 1991 for “Best Metal Performance.” Emphasizing the massive impact of Rust In Peace in the July 2010 issue of Guitar World, writer Richard Bienstock calls it â€œone of the pinnacles of the first wave of thrash metal.â€ He continues, â€œA defining quality of Megadethâ€™s soundâ€”and the one that perhaps most sets them apart from their â€˜Big Fourâ€™ thrash brethren, Metallica, Slayer and Anthraxâ€”has always been the bandâ€™s fiery mix of speed-metal ferocity and progressive instrumental virtuosityâ€¦nowhere has this combination been displayed better than on Rust In Peace.â€

The full track listing for the Rust In Peace Live CD, DVD and Blu-ray is as follows: