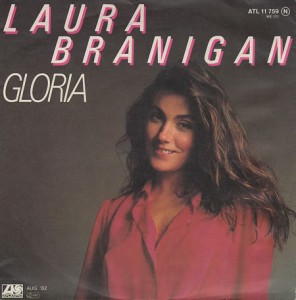 You’re in second grade gym class and your teacher queues up a song for everyone to move to. You immediately love its high energy and the richly sung lyrics. After gym you spend the rest of the school day humming that song. Then it’s later in the week and you’re in your father’s cougar and he’s got the music pumping. He’s usually an oldies-music type, but this time he leaves it on the pop station and there’s that song again. You sing along, of course getting some of the words wrong, but you’re with your dad driving around and having a good time. Finally Saturday comes around and after you’re done watching your favorite cartoons, you turn on American Bandstand and there she is, long dark locks and that rich multi-octave alto that’s been stalking you all week – It’s Laura Branigan and she’s singing “Gloria.”

“Gloria” was a huge hit in the early ‘80s. It reached platinum status and gave Branigan her only Grammy nomination as a solo artist. What’s more the song has a rich history that set a precedent for another of Branigan’s hits “Solitaire.” It seems that the original “Gloria” was initially in Italian and done by composer Umberto Tozzi. It was also a ballad. Several years later the producers for Branigan’s first studio backed album rearranged and had English lyrics written for it. The revamped track with its up-tempo beat combined with the luscious rhythmic sound in Branigan’s voice makes it almost unrecognizable from the original.

What’s more “Gloria” is one of the few songs that have not been re-recorded by a popular artist. Although Tozzi did his own English rendition after Branigan and other artists have covered the song or have sampled parts of it, there has never been anyone with brand name appeal who would attempt to put “Gloria” on their album. Thus making the Laura Branigan version the most well known.

Nearly thirty years later this iconic classic is still being heard in commercials and as a pop culture reference in live action and animated television.

The lyrics to “Gloria” may be dark with tinges of sarcasm, but for that seven-year-old in gym class it was the beginning of a love affair with ‘80s music.

About Donna-Lyn Washington 617 Articles
Donna-lyn Washington has a M.A. in English from Brooklyn College. She is currently teaching at Kingsborough Community College where her love of comics and pop culture play key parts in helping her students move forward in their academic careers. As a senior writer for ReviewFix she has been able to explore a variety of worlds through comics, film and television and has met some interesting writers and artists along the way. Donna-lyn does a weekly podcast reviewing indie comics and has also contributed entries to the 'Encyclopedia of Black Comics,’ the academic anthology ‘Critical Insights: Frank Yerby’ and is the editor for the upcoming book, ‘Conversations With: John Jennings.’