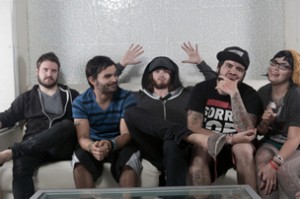 Iwrestledabearonce have revealed the track listing and cover artwork for their new CD Ruining It For Everybody, due out July 26 via Century Media Records (see below). Last week, the band gave fans a sneak peek at the new music when they debuted the song â€œKarate Nipplesâ€œ at: http://www.metalsucks.net/2011/05/19/exclusive-track-premiere-iwrestledabearonce-are-ruining-it-for-everybody-show-us-their-karate-nipples/.

Every person who pre-orders the new CD at MerchNow (http://merchnow.com/iwabopresale) will be entered to win one of five prize packs featuring 2 tickets to see Iwrestledabearonce at a show of their choice on the upcoming All Stars Tour, a meet and greet with the band, and 2 merch items of their choice at the show. One grand prize winner will be chosen out of these five to win the above PLUS every Ruining It For Everybody presale merch item. Various pre-order CD packages will be available for purchase. The first 100 IWABO posters purchased as part of a pre-order package will be autographed. In addition, the first 500 pre-orders will receive a custom IWABO birthday card.

Breakneck guitar battery subsides during a haunting chorus on the album’s first single, “Karate Nipples.” Elsewhere on “Next Visible Delicious,” glitchy electronics derail into a vaudevillian death metal delirium. Closing track “Button It Up” ventures into raw, real darkness.Iwrestledabearonce have ruined heavy music, because no one can compete with them now.

Bradley encapsulates the band’s sound this time around. “It’s heavier, catchier, and better organized than anything we’ve done so far. We took a really spastic blend of genres and made it more cohesive.”

“The album is another story and chapter in my life,” reveals Cameron. “A lot has happened since the release of our debut, and it means a lot to me that I get to express my thoughts, beliefs, and feelings through this album.”

Iwrestledabearonce don’t shroud anything in mystery, and they’re doing exactly what they want. For Bradley, the album title serves as the ultimate middle finger to expectations, conventions, and the norm. “We do whatever the fuck we want, and that normally ends up pissing people off,” he declares. “We like to take elements from every style and genre and ruin them for everybody.”

For Cameron, that deconstruction includes delving deeper than your average metal singer. On “Next Visible Delicious”, she serves up a warning about the dangers of not thinking for oneself. “People believe anything fed to them if they are told by someone with power that it’s truth. Your head will spin trying to rationalize religion, politics, and environment. The song references mother nature becoming fed up with our ways and swallowing us whole. It’s a warning of our long-awaited Armageddon. No, not the movieâ€¦”

Look for Iwrestledabearonce to take their one-of-a-kind, fearless live show on the road again starting July 21. First up, theyâ€™ll join The All Stars Tour, featuring Emmure, For Today, Born Of Osiris, After The Burial, Chelsea Grin, Attila, Alesana, Bless The Fall, In This Moment, The Ghost Inside, Motionless In White, Sleeping With Sirens and For All Those Sleeping. These dates run through August 21 in Las Vegas, with another week of shows expected to be added.

The full track listing for Ruining It For Everybody is as follows:

2. You Know That Ainâ€™t Them Dogs’ Real Voices

7. Break It Down Camacho

8. Stay to the Right

The All Stars Tour: