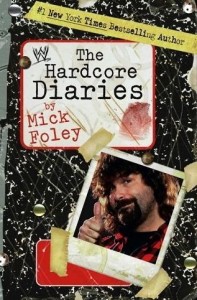 Professional wrestling may have lost its charm over the past couple of years, but characters like Mick Foley have endured the test of time. Admired by fans and media for over a decade for his in-ring style and his witty and spirited ways of storytelling, Foley has produced several best sellers, including the entertaining “Have a Nice Day,” his first foray into writing, which debuted in 1999.

Since then, Foley has even written a few childrenâ€™s books and works of fiction that have sold admirably for a man known more for shoving socks down peopleâ€™s throats and double-arm DDTing them rather than writing prose. Nevertheless, while his other attempts at writing have proved the hardcore legend is more than just that, his fans hungered for another autobiographical work, one that showed his recent transformation from wrestling icon to part-time wrestler, part-time writer and family man.

“Hardcore Diaries,” Foleyâ€™s third autobiographical work, originally released in March of 2007 on hardcover and now available on paperback, is that work. Combining the life of a professional wrestler trying to win back his fans in a part-time role in the WWE, while working on a novel and being a good father and husband to his maturing children and wife, Foley is captivating and candid throughout.

Much like his career in wrestling, which Foley himself would admit was successful because he hid his weaknesses in the ring (a lack of athleticism and the absence of a great body) and encompassed viewers with his strengths (Charisma, in-ring durability and poise), “Hardcore Diaries,” does the very same. Not a phenomenal wordsmith by any stretch of the imagination, Foley uses a conversationalist tone and language that appeals to the fans heâ€™s writing to, rather than intimidating them with language they canâ€™t comprehend. Itâ€™s not that Foley isnâ€™t capable of using complex language (anyone who has read his two novels, “Scooter” and “Tietam Brown” can attest to that), itâ€™s the fact that his hardcore fans want the very best in him and Foley isnâ€™t the type of man that disappoints.

Throughout the 384 pages that make up “Hardcore Diaries,” the reader will feel like this is Mick Foley conversing with them rather than them reading his words. Hearing Mick Foley tell raunchy stories about his time on the road during the early parts of his career to how the writing room in his home is permanently decorated in a Christmas theme paint a picture of a man who is living his dream and has come full circle to realize it. If you leave this book and get only one thing from it, knowing that Mick Foley understands his purpose in life and is dedicated to making his family and himself as happy as possible would be it.

While older readers will appreciate the candid nature of Foleyâ€™s words and the fun-loving, yet hard-working nature his life has, hardcore wrestling fans will get something else out of the book. To them, “Hardcore Diaries” will feel like a great story being told via bar stool, filled with bumps, bruises and smiles along the way that are what you make of it. There is no real ending to “Hardcore Diaries,” just a stating of circumstances and feelings of the industry, the people who make it tick and the families who have their lives invested in it. That in itself is enough of content for a great book and Foley is at his very best throughout, keeping you glued to the book through every funny conversation with Vince McMahon and every stop on the map he visits.

To the beatniks of the â€˜60s, the words of Jack Kerouac hold a special place in their hearts. To wrestling fans, Mick Foley is their scribe. He tells the stories of the industry that they long to hear and makes them feel connected to it like no other writer can. Say what you want about his grammatical stylings (Foley himself even critiques them from time to time in a self-deprecating, yet whimsical way), but Foley keeps his readerâ€™s attention throughout and is earnest, entertaining and reflective throughout, creating one of the enjoyable works on the industry to date.