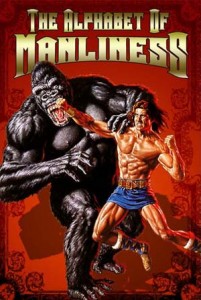 For years, George Ouzounian, AKA Maddox, webmaster and author of â€œThe Best Page in the Universe,â€ has had the entire Internet world in stitches with his rants about pop culture and society. Giving the politically correct â€œthe deuce,â€ [or the middle finger as most Americans call it] more times than one can count, Maddox has gained a cult-like following for expressing his views and not caring who he offends.

Maddox continues develop his raw blend of unrestrained politically incorrect comedy in his new book, â€œThe Alphabet of Manliness,â€ where he systematically breaks down all things that make real men, MEN. Knowledge about every crucial part of a manâ€™s day to day life is covered in this book, such as how to pick out the perfect pair of breasts and explains why men love things like Pirates and Chuck Norris so much.

That alone make it a must own for any man that prefers â€œSouth Parkâ€ over â€œLaw & Order,â€ or any person that wants to laugh more than read.

Other subjects addressed in the book include many other â€œManlyâ€ topics such as Beef Jerky, Zombies, Urinal Etiquette, Lumber Jacks and of course, Metal. In every chapter of the book [26 of them, all organized to correspond to a letter of the alphabet], Maddox goes out of his way to offend as many different people as possible.

In doing so, he creates one of the funniest books of our generation, which can be appreciated by anyone except the hardcore liberal or those who expel dust from their rectums.

Simply put, Maddox has designed â€œThe Alphabet of Manliness,â€ in a way that itâ€™s impossible to stop laughing while reading it. Everything from the drawings that show the various stages of breast development to his random comments on why women have problems listening to their husbands, Maddox is hilarious, grotesque and disgusting all at the same time, creating a book that pulls no punches and sacrifices nothing in its attempt to make its readers laugh harder than they ever have before.

By the end of the book, one thing becomes apparent: â€œThe Alphabet of Manliness,â€ is the conscious of every man in America and the diary of every woman that can take a step back from their gender and enjoy a good-humored laugh at their own expense. Most importantly, however, it says the stereotypical things about men and women that need to be said on a regular basis, that are never spoken.

When all is said and done, â€œThe Alphabet of Manliness,â€ is a magnificently crafted comedy classic that can be appreciated by anyone open-minded enough to laugh about the things the make men so much different from women.