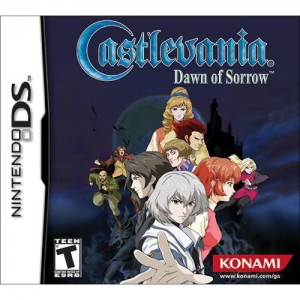 For nearly 20 years, the Castlevania series, regardless of the system itâ€™s appeared on, has always been a symbol of gaming excellence.

Fortunately, for Nintendo DS owners, â€œCastlevania: Dawn of Sorrow,â€ continues the seriesâ€™ quest in greatness. In fact, many might make the case that â€œDawn of Sorrowâ€ may be the best Castlevania game since â€œSymphony of the Nightâ€ reestablished the series on the Playstation over 10 years ago.

Taking place after the last game on the Gameboy Advance, â€œAria of Sorrow,â€ gamers will see that the journey of Soma Cruz has just begun. After finally learning to tame his demonic power in the previous game, Cruz must now put his power to use in deterring a demonic cult from reviving the dark lord once again, using any means possible.

Those that are familiar with the series will find that Dawn of Sorrow looks and plays remarkably familiar to â€œSymphony of the Night.â€ Itâ€™s amazing how Konami managed to create this game on a system not known for great graphical capabilities and still turn out a solid looking game.

On the gameplay front, like most games in the â€œCastlevaniaâ€ series, â€œDawn of Sorrowâ€ controls remarkably. Veteran and newbie gamers will find controlling Somaâ€™s actions a synch after only a few short minutes of gameplay.

What is also interesting is how Konami decided to implement the DSâ€™s touch screen in â€œDawn of Sorrow.â€ Using the touch screen to draw a magic gate around the gameâ€™s bosses to defeat them truly ties the best aspects of the game into the ability of the system, making for not only a great game, but a game that couldnâ€™t be done on any other system.

Making â€œDawn of Sorrowâ€ an even more enjoyable title is its length and the appearances of several memorable characters in other gameplay modes. Taking anywhere from 10-15 hours to beat depending on your gaming ability, â€œDawn of Sorrowâ€ is one of the most challenging games on the DS.

Also considering that beating the game opens up â€œJulius Mode,â€ in which gamers get to play through the entire game with the last member of the Belmont clan and a few other surprises, â€œDawn of Sorrowâ€ is a game that most will work very hard to finish.

On the whole, â€œDawn of Sorrowâ€ is a must own game on the Nintendo DS for any hardcore Castlevania fan or any challenge hungry gamer that has never played through any of the previous games before.