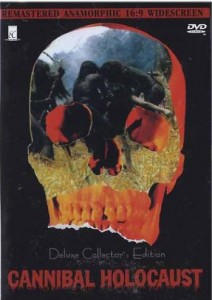 First released in 1980, â€œCannibal Holocaustâ€ is a cruel picture with an alarming legacy â€“ it often turns up on lists of the most controversial movies ever made. Its reputation has inspired a new DVD reissue from Grindhouse Releasing, as well as rumors of a remake to be released this year. It has various admirers, including Buckethead, who performed the â€œCannibal Holocaustâ€ theme song on guitar in at least two concerts, and director Eli Roth, who invited its maker, Ruggero Deodato, to play a role in â€œHostel: Part II.â€ Anybody whoâ€™s seen the kind of films Roth makes might understand why.

That was not a compliment.

As an experiment in wafer-thin social commentary (curtain line: â€œI wonder who the real cannibals are?â€), â€œCannibal Holocaustâ€ is self-defeating â€“ it employs the use of sickening brutality in order to oppose it. There are all kinds of disgusting scenes in it, like when its characters amusedly observe a woman whoâ€™s been impaled, and when they catch an enormous turtle and relieve it of its shell. The impalement scene involves special effects; the turtle scene does not.

The animal cruelty doesnâ€™t stop there, though. Six other deaths are included here, but that doesnâ€™t mean they have any significance to the plot, which makes â€œCannibal Holocaustâ€ all the more terrible. Even the director himself regretted these scenes: â€œI was stupid to introduce animals,â€ said Deodato in Fangoria.

Some DVD editions offer an â€œanimal cruelty-free versionâ€ of the film that omits them all, but then all youâ€™ve got is an average bad movie. As valueless as they are, these are easily the most disturbing and effective scenes in the film. Again, that was not a compliment.

The film is about an unfinished documentary shot in the Amazon: Youâ€™d think the native cannibals are to blame for all the ghastly moments in it, but theyâ€™re really the actions of a few documentarians who provoke violence and record the results on film. When they donâ€™t come back, a local TV station asks Professor Harold Monroe (Robert Kerman, who also starred in â€œDebbie Does Dallasâ€) to rescue them and the film for a fantastic feature story.

Predictably enough, what he finds doesnâ€™t slide past the censors.

A lot of bad movies fail because their makers are clueless about what theyâ€™re trying to do. Ed Wood, the most astonishingly untalented filmmaker who ever lived, made movies that deserve special attention: What made â€œGlen or Glendaâ€ and â€œPlan 9 from Outer Spaceâ€ so awful (and hilarious, depending on your point of view) was that they were intended as sincere reaches for greatness.

â€œCannibal Holocaust,â€ on the other hand, is a deplorable film because it does exactly what it wants to do â€“ exploit death and violence for cheap thrills. Another part of what makes it so bad, though, is that it doesnâ€™t earn the right to do so.

And yet, for all the audiences whoâ€™ve hated this movie, itâ€™s been praised by some as a cult classic. For some unfortunate souls, this is even considered essential viewing. If you think about it, though, â€œCannibal Holocaustâ€ probably deserves the attention it gets â€“ itâ€™s not easy to remember another film that gets away with as many things as this one does.

Itâ€™s possible, in fact, that what happens in â€œCannibal Holocaustâ€ might never be filmed again.