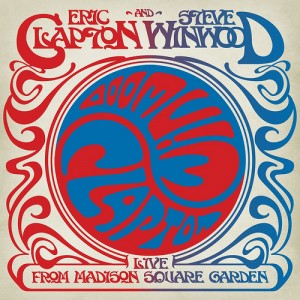 It is not very often that two rock and roll veterans who once played together in a super group reunite decades later to perform a series of concerts. However, Eric Clapton and Steve Winwood, two of classic rocks iconic figures, have documented this rock dream, teaming on Clapton and Winwood Live from Madison Square Garden, which was recorded in late February 2008, producing one of the most enjoyable live concert albums of all-time.

Clapton, who has earned the monikers â€œGodâ€ and â€œSlowhandâ€ at various stages of his guitar playing life, has had a prolific and monumental career. His initial lead guitar role was as a member of the Yardbirds, the first rave-up group. The band, which served as a virtual guitar factory having had Clapton, Jeff Beck and Jimmy Page as members, had a commercial hit with â€œFor Your Loveâ€ in 1965. This led to Claptonâ€™s departure because he was a blues purist and did not like the direction the band was taking. He soon joined John Mayallâ€™s Bluesbreakers afterwards, where his blues-based playing had a platform to shine. After a short stint with the Bluesbreakers ( less than a year) he left to form Cream with Jack Bruce (a former bass player with the Bluesbreakers, Graham Bond Organization and Manfred Mann ) and drummer extraordinaire Ginger Baker (also a former member of the Graham Bond Organization).

This teaming, though extremely contentious due to dissension between Bruce and Baker, nonetheless produced the first super group and featured extended jams and mind-blowing improvisation on the part of these three incredible players. After tremendous acrimony between the members, Cream dissolved despite their musical brilliance. After some jam sessions with Winwood, ClaptonÂ  and he decided to form Blind Faith, (1969) with Ric Grech (formerly in the progressive group â€œFamilyâ€) and Cream drummer Ginger Baker, which didnâ€™t last very long, but was nonetheless a brilliant collaboration. Clapton later formed Derek and the Dominoes and gave us â€œLayla and Assorted Love Songs,â€ which featured the brilliant slide guitar playing of the late, great Duane Allman. Through the succeeding years Clapton has hadÂ  quite a successful solo career ( â€œI Shot the Sheriff,â€ Wonderful Tonight,â€ â€œForever Manâ€ and â€œTears in Heavenâ€ to name a few) and been commonly acknowledged as a guitar god.

Winwood played keyboards and sang at age 15 in the Spencer Davis Group in the late sixties with his older brother Muff. Despite some incredible early success (â€œGimme Some Lovinâ€ and â€œIâ€™m a Manâ€) he too had some creative differences with the rest of the band and wanted them to go in a more free form jazz-rock direction. This led to him leaving them and forming Traffic, one of the most underrated bands in rock history. His collaboration with Chris Wood, Dave Mason and Jim Capaldi allowed Winwood to broaden his horizons, incorporating jazz in a rock setting on such brilliant tracks as â€œGlad,â€ â€œLow Spark of High Heeled Boysâ€ and â€œDear Mr. Fantasy.â€ His vibrant vocals, keyboard work on both acoustic piano and organ and guitar playing with the band broke new ground in album-oriented rock. In 1969, he joined forces with the aforementioned Clapton to form â€œBlind Faithâ€ and produce an excellent debut album. He later had a successful solo career with brilliant albums like â€œArc of a Diverâ€ with the stellar track â€œWhen You See a Chanceâ€ and later hits â€œBack in the High Lifeâ€ and â€œHigher Loveâ€ with James Taylor and Chaka Kahn on background vocals respectively.

After this whirlwind tour ofÂ  these two classic rock legendsâ€™ past accomplishments, it is a breath of fresh air to have a new release from them that pays homage to the past, but still manages to seem fresh. Clapton, 64 and Winwood, 61, shine on this recording and have both aged like fine wine. Clapton plays like a man possessed, who has just made a deal with the devil at the crossroads a-la his guitar idol Robert Johnson. His fluid and melodic guitar lines and scorching solos on Hendrix classics â€œLittle Wingâ€ and Voodoo Chile,â€ both complement the songs and add to them.

Winwoodâ€™s voice has matured and its timbre reminds a listener of Ray Charles, especially on his poignant rendering of â€œGeorgia,â€ the Hoagy Carmichael/Stuart Gorell timeless masterpiece. Though he canâ€™t reach some of the notes from his earlier days, his refined voice is soulful and expressive His lead and background vocals, including excellent harmonizing with Clapton are powerful and evocative. The Hammond B-3 organ he employs is a wonderful addition to many tracks on the CD, as well as his stellar guitar work.

A particularly impressive part of this 21 track double CD are the selection of songs. It includes most of the â€œBlind Faithâ€ album.â€œHad to Cry Todayâ€ has an incredibly tasteful Clapton solo, which includes breathtaking trills. â€œPresence of the Lord,â€ a Clapton penned opus, has the two superstars trading verses. The bridge of the song, with a raw sounding Clapton solo, is as good as or better than the original album track. â€œWell All Right,â€ a Buddy Holly original on the Blind Faith debut, has wonderful synthesizer work and a great guitar introduction, while â€œCanâ€™t Find my Way Homeâ€ features Winwoodâ€™s vocals out front without much embellishment and gives a listener chills and takes him/her back to 1969 in a heartbeat.

The CD also features four Traffic standbys. â€œGlad,â€ is a jazz-rock instrumental tour-de-force that features a blistering Clapton solo is worth the price of the CD. â€œPearly Queenâ€, a forgotten Traffic nugget from the album of the same name, has wonderful guitar-keyboard give and take. Two tracks off the â€œMr. Fantasyâ€ album ( 967) are the classic â€œDear Mr. Fantasy,â€ with expert acoustic piano work and the only weak song on the CD, â€œ No Face, No Name, No Number.â€

Claptonâ€™s roots are in the blues and that genre is not ignored on this combined effort. â€œSleeping in The Groundâ€ is a blues track sung by Winwood (which is also available on the deluxe edition of the Blind Faith album). Clapton himself gets to shine on Otis Rushâ€™s â€œDouble Trouble,â€ the ultimate man down on his luck song. The slow, heart wrenching Clapton guitar solos truly convey the songwriterâ€™s intent, which is to make us feel sorry for a poor soul (â€œHard for me to keep decent clothesâ€) and his gritty, lived in vocals are blues personified. â€œRambling on My Mindâ€ is a Robert Johnson track that demonstrates what a brilliant guitarist Clapton is, as he takes us to the Mississippi Delta with his acoustic guitar work.

It would make Johnson, the architect of the blues, proud and happy of his disciple.

Claptonâ€™s Derek and the Dominoes rocker â€œTell the Truthâ€ is given a breath of fresh air with the addition of Winwoodâ€™s backing vocals, while his successful solo career is addressed with â€œAfter Midnightâ€Â  and â€œCocaine,â€ two J.J. Cale tunes that Clapton made his own. Winwood highlights a solo track of his,â€œSplit Decisionâ€ that was co-written by Eagle member Joe Walsh and an interesting choice in Buddy Milesâ€™ â€œThem Changes,â€Â which is given royal treatment with the help of an unbilled horn section and â€œLowdown,â€ a shuffle number, which is not listed on the inside booklet.

The sensational pairing on â€œEric Clapton and Steve Winwood Live from Madison Square Gardenâ€ is aided by an excellent ensemble which includes Willie Weeks on bass, Chris Stainton on keyboards and Ian Thomas on drums. They are true professionals who fill out the sound, but do not dominate, which allows for Clapton and Winwood to shine brightly.

It is refreshing to pick up a CD that reunites two grizzled veterans of the greatest period in rock history and be pleasantly surprised. It is a dream for a classic rock aficionado. â€œEric Clapton and Steve Winwood Live from Madison Square Gardenâ€ is a fantastic live CD with excellent sound (it sounds more like a studio release than a live effort) that reaffirms these musical giantsâ€™ reputations with excellent vocals, brilliantly executed, and extended guitar solos and melodic and hard-hitting keyboard artistry. The old tracks sound new again and previously uncovered songs are a godsend for Clapton and Winwood followers.