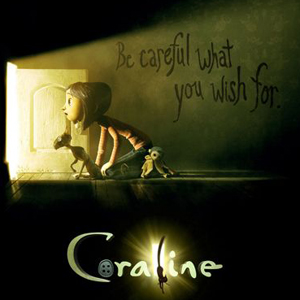 If Charles Addams had to put one of those Rankin/Bass Christmas specials together, â€œCoralineâ€ mightâ€™ve been the result. He probably wouldâ€™ve envied the minds that couldâ€™ve designed a movie like this, but not the ones who produced the story, which weighs the whole thing down. The first half is a flaccid setup that runs out of steam pretty early, one that Peter Griffin would’ve fired a missle at:

â€œThereâ€™s no conflict in this movie!â€

That just leaves the second half, which is only a bit more interesting. The movie still has to deal with a reheated story and shallow characters, all of which is as decorative and transparent as cellophane. â€œCoralineâ€ has potential that never gets wholly realized, all because it follows a pattern and doesnâ€™t take any risks. Some animated fantasies feel like dreams â€“ this one just sleepwalks.

The early scenes show a family settling into their new place at Pink Palace Apartments. Coraline Jones (voiced by Dakota Fanning) is a little girl whoâ€™s ignored by her overworked parents (voiced by Teri Hatcher and John Hodgman) and irritated by her new tagalong friend, the absentminded Wybie (voiced by Robert Bailey Jr.). On her first day in the new apartment, she passes the time by counting bugs.

Then she squishes them.

Eventually, she finds a secret passage in one of the other rooms. It leads her to another world, which is a rosier version of her own: Her â€œOther Motherâ€ and â€œOther Fatherâ€ are affectionate and disarming, and â€œOther Wybieâ€ is less annoying â€“ especially since he canâ€™t talk. Of course, there is a catch, and if youâ€™ve ever heard â€œHotel California,â€ you already know what it is.

Various theaters have the technology to play â€œCoralineâ€ in 3-D, but the novelty isnâ€™t enough to hold down a 100-minute feature. You even have to pay for the glasses, which cost three bucks a pair. The irony here is that going the extra mile makes the film look more desperate, as if it were trying to distract the audience instead of entertaining it.

Making movies in 3-D might seem like a fad, but the major studios want to turn it into the next big thing. Easier said than done: Although 5,000 theaters were going to have 3-D apparatus by March, only 1,500 could afford to make the transition. Itâ€™s probably just as well â€“ the new screens make â€œCoralineâ€ look like pictures from the worldâ€™s biggest View-Master disc.

Although itâ€™s a shame that nobody could raise the story to a higher level (itâ€™s hard to believe that such a slim narrative started its life as a novel written by Neil Gaiman), youâ€™ve got to applaud the filmmakers for the way they executed the animation. They were especially creative in the way they used those fantastic colors, which become richer when Coraline opens the door to the other world. Itâ€™s kind of like what Dorothy Gale sees in â€œThe Wizard of Ozâ€: Washed-out shades in one world, proud hues in the other. That might be the nicest thing you can say about a movie with 3-D bugs.