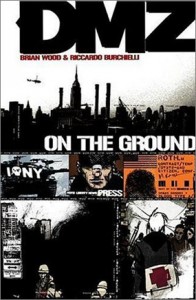 And you’re stuck right in the middle.

â€œDMZ Volume 1: On The Groundâ€ is the first of this seven book series of graphic novels from DC’s Vertigo Brand, written by Brian Wood [Channel Zero] and illustrated by Riccardo Burchielli [his first work in the United States] and is set in near future America that is torn apart by a new civil war.

The â€œFree State Army,â€ consisting of a band of insurgents, is sick of an America that is in decline; bringing Iraqi-style warfare to the streets of the U.S.; they then come to a standstill in Manhattan, known as the DMZ where they fight against the U.S. military.

Matty Roth, a young journalist for Liberty , a politicized TV network, has been dropped off into the DMZ to get the real story. Ironically, Roth is an intern who is put in the middle of this war, a confrontation that has left him emotionally shackled. With nowhere to run and nowhere to hide, his only choice now is survival. Nevertheless, he’s gritty and has a ton of guts, which help him throughout his adventure.

After the first dozen or so pages, it’s fairly obvious that DMZ is well-written, as Wood does a great job of structuring the premise and sticking to a simple, yet eerily John Carpenter-esque story line, thus making it enjoyable for the reader to digest. Because of this, DMZ will not only appeal to hardcore Vertigo fans, but will entice casual readers by moving them along and allowing them to read at a brisk pace, effectively wanting more in the process.

Aside from the writing of Wood, the artwork in this graphic novel is fantastic as well and will remind many of Frank Millerâ€™s â€œSin City,â€ as gritty landscapes encompass the reader and make them feel as if they, too, are fighting for their lives along with Roth.

While the art is indeed top notch and Burchielli should be praised incessantly for his work here, it is the non-stop and creative storytelling that makes DMZ a great read in the end.

In the words of Arnold Schwarzenegger, â€œGET DOWN.â€

You have just entered the demilitarized zone.