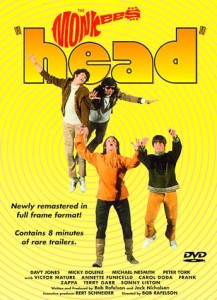 “Head” is a dazzling and amazing piece of art that deserves to be seen. The plot structure is unique in the sense that it manages to challenge our fundamental notions of what we think a film’s plot should be.Â It is a bizarre series of events that are randomly tied together. â€œThe Monkees,â€ better known as Davy, Mickey, Peter and Mike were trying to reinvent the way the world looks at them in this wild motion picture written by Jack Nicholson.

Easily comparable to another Nicholson original, “The Trip,” â€œHeadâ€ is filled to the brim with psychedelic imagery.Â Responsible for the direction of the movie is Bob Rafelson, who has been involved with previous Monkees based productions, such as their television series.

The opening scene is automatically disorientating as we watch Mickey Dolenz commit suicide off a bridge. This was not what teenyboppers that loved the sitcom were expecting. While Dolenz is jumping the classic “Porpoise Song” plays in the background. The film then openly admits to the audience they have no plot andÂ will simply jump around. The feature even concludes with the same exact scene except all four Monkees jump off the bridge.

Between the beginning and ending, we are taken on a wonderful journey that has no real destination. The Monkees take us to Vietnam shortly before we watch Dolenz blow up a Coke machine with a tank. Italy then surrenders to him. The Monkees are even dandruff in Victor Mature’s hair before becoming trapped in a giant vacuum.

Davy fights Sonny Liston after giving up on the violin. Mike has a birthday party, but makes fun of Lord High ‘n Low, (Timothy Carey) for being handicapped. On top of that, the Monkees are constantly finding themselves trapped in a big black box that represents how they felt about the childish television show they were in.

The flick is also filled with some excellent cameos. Dennis Hopper and Jack Nicholson were alsoÂ working onÂ â€œEasy Riderâ€ at the time and can be seen in this film briefly in the restaurant when the director yells â€œcutâ€ and Peter admits that he hated having to punch a “woman.” Â Frank Zappa and his talking cow tell Davy that his music is too white. Sonny Liston beats up Davy in the ring and is seen adding steam to the sauna in a later scene. Annette Funicello is Davy’s heartbroken girlfriend who thinks he should give up boxing. Victor Mature is himself but seems to want to kidnap the Monkees for some strange reason.

All of this, while disambiguated, makes for an extremely amazing experience.

The music is some of the Monkeesâ€™ best and maybe that is because they finally used some of Peter Tork’s songs. Tork’s music was the least used during the television show although he was one of the two members with the most musical experience. â€œCan You Dig Itâ€ and â€œDo I Have To Do This All Over Againâ€ were his contributions to the soundtrack. Tork also seems to be letting out some frustration in the film about having to always play the dumb one on the series.

â€œCircle Skyâ€ is Nesmith’s anti-Vietnam opus and we are shown haunting real life images as the song plays. â€œAs We Go Alongâ€ is a peaceful song that is played as we see separate footage of The Monkees reflecting on life in their most relaxing places. â€œDaddy’s Songâ€ is a dance number performed by Davy and Toni Basil in the black box. This song is great fun and may be the only example of the old Monkees in this entire film. Davy does a great job with the song and shows off his entertaining abilities.

A great experiment in cinema, â€œHeadâ€ isn’t for everyone, but it is sad that not many more films like it were made. It challenges what an audience desires in a film and is equally as charming as it is selfish. Because of that, its carved its own niche in movie history and is worth a view by everyone, even those not attracted to the source material.