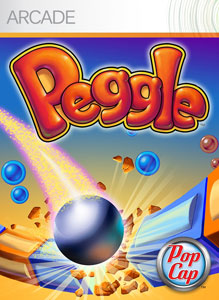 Since its 2007 release for the PC and Mac, “Peggle” has been ported to the Nintendo DS, Xbox Live Arcade and, as of May, the iPhone and iPod Touch. While the game is wonderful regardless of where you play it, it seems especially perfect for the on-the-go touch screen device.

Each board in “Peggle” has a certain number of round â€œpegsâ€ scattered throughout the screen that usually outline a picture in the back. A number of blue pegs, differing from board to board, are there primarily to help the player gain points. The random 25 orange pegs are the basis of the game; hit all the orange pegs to clear the board and cue the celebratory Ode to Joy. There are also two more kinds of pegs, a random purple one–it takes the place of a blue peg every turn–which gives bonus points and two green ones. For a set number of turns after hitting the green peg the player will have a power to help them clear the board. You will unlock the 10 types of power ups as you play through adventure modes.

Now to hit the pegs, there is a cannon type launcher on the top of the screen that holds ten balls. To aim your cannon, you move a scroll wheel, placed on the side of your choosing, up for right and down for left. Once youâ€™re set with where you want the ball to go, above the wheel is the fire button. From there you watch your ball bounce around the pegs until they ultimately fall off the bottom of the screen. However, if youâ€™re lucky, the ball will end up in the â€œfree ballâ€ basket that slides along the bottom of the screen. When all the orange pegs are gone, the bottom changes to five bins worth either 10,000 (far right and left), 50,000 (right and left), and 100,000 (middle) points.

Though minimal, the controls are very responsive and the only complaint is that when you lift your finger off the wheel, it sometimes moves from where you had aimed.

In “Peggle,” there are four types of game modes, adventure mode, which unlocks the powers ups and levels by learning from the “Peggle” Masters, a quick play mode to replay any of the beaten levels, a duel mode where you take turns with a friend or the computer to see who can score more points in one level and a challenge mode, where you try to achieve a specific goal.

As a mobile game, “Peggle” is absolutely perfect. Itâ€™s easy to play, highly entertaining and addictive. “Peggle” is one of those games you can pick up and play for five minutes as you wait for someone, or play on your daily train ride to pass the time. Itâ€™s not an in depth adventure game, but it’s one youâ€™ll be playing time and time again.

For five dollars from the app store you canâ€™t go wrong.