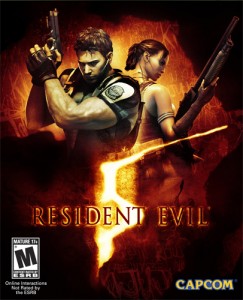 Remember how scared you were when you played the first few Resident Evil games? Remember how even though you knew it was a bad idea, you still played the game with the lights off and your TV at full blast? Remember when the zombies came at you and you crapped your pants in fear for the next month?

Well thatâ€™s all over.

The latest installment of the zombie slaying series Resident Evil 5 comes up short on sheer terror.
The gameplay mechanics and controls are similar to Resident Evil 4 with the same intelligent zombies now using guns, spears and other sorts of firepower from chainsaws. The zombies are also much faster and run this time around. You play as Special Agent Chris Redfield, making his return to the franchise after last appearing in Resident Evil 2. This time around though, youâ€™re in Africa with a partner for the first time in RE history.

Playing with a partner expands on RE:4â€™s idea of protecting someone else on-screen, while at the same time your partner Sheva watches your back as well. The only problem with your partnerâ€™s A.I. is half the time she spends too much time dawdling and screwing around shooting zombies and less time helping you move things or open doors to progress to the next screen. Also, if you give your partner any machine gun ,she wonâ€™t shoot rapid-fire very often. Instead ,sheâ€™ll literally shoot one bullet at a time and it takes forever in the later stages. She also doesnâ€™t use grenades so you’re better off just taking them whenever she picks them up because you will need them.

The plot is very predictable and wasnâ€™t the best way to tie Africaâ€™s virus infection to the incidents of Raccoon City, although it is nice to see older characters fall back into the story.

One other new feature that works well is the gameâ€™s co-op mode in which you and a fellow zombie bashing amigo can get together and try to beat the game. Your friend can also join in at any point in the game to help you out if youâ€™re having trouble so itâ€™s nice to know you donâ€™t have to start over if someone else wants to play. The downside to this is your friend doesnâ€™t get any of the wepons Sheva had when you were playing by yourself. They just get the handgun that everyone starts out with. In a way, itâ€™s like they have to start from the beginning, unless you give them one of the guns you already have. Itâ€™s not a terrible thing to deal with, but it would have been nice if your friend had an up to date arsenal to help you deal with the tougher opponents later in the game.

Graphically speaking, RE5 is stunning. The designers knew what they wanted and were able to flawlessly execute them. The interactive cut-scenes are also quite enjoyable and transition into gameplay very well. The realistic graphics look incredible on any TV set HD or not. At times, you canâ€™t tell the difference between cut-scenes and actual gameplay. Itâ€™s a great thing to look at and the animations are also fast and responsive to your controls, making it even more fun to watch.

Aside from a terrible final boss battle, the big bummer is how the franchise infamously known for scaring its audience can no longer do its job. It doesnâ€™t make sense how they got everything right, but were unable to deliver in the scare department. Nothing jumps out at you anymore unless you run ahead too fast and literally bump into it, which is supposed to happen regardless.

Nevertheless, Resident Evil 5 keeps the flesh-eating spawns of Satan coming in this new installment, merging old and new for fans young and old of the series. However, with the absence of any real fright, the game serves as a mere abduction, rather than a full-fledged sacrifice to the gaming gods.

â€œResident Evilâ€ has now fully evolved beyond its survival horror roots, but the new genre of â€œEvilâ€ is still worth playing.

Capcom’s latest installment of â€œResident Evilâ€ further deviates from the traditional path of the series. The days of counting bullets, desperately seeking the next typewriter and worrying about what might pop up behind you are long gone. â€œResident Evil 5â€ is more about shooting your way through hordes of creatures in a fast-paced, action focused style. Although it has a lot in common with â€œResident Evil 4,â€ it takes the action element to a more extreme level, in addition to adding a new partner system.

One thing â€œResident Evil 5â€ does have in common with its predecessors however is a truly engaging story. The game puts you in control of Chris Redfield, a familiar face who made his debut in the first game. Chris now works for an anti-bio-terrorism agency called the BSAA, which is intent on cleaning up bio-weapons that have fallen into terrorist hands due to the fall of the Umbrella Corporation. Chris’ latest mission puts him in the Kijuju district of Africa in hot pursuit of a known bio-weapon dealer, Ricardo Irving.

After arriving in Africa, Chris meets a local BSAA operative, Sheva Alomar, who joins him on his mission. Shortly into the game, Chris and Sheva will also learn about a top secret terrorist project known only as: Uroboros. As the game unfolds, more details on Uroboros are revealed and what was supposed to be a simple weapons dealer takedown turns into something much bigger. The story unfolds in a climatic way, leaving you hungry for more details as you progress through the game.

This game shares the same over the shoulder camera angle and aiming style as â€œResident Evil 4.â€ In fact, they may be a little too similar. The only truly original feature â€œResident Evil 5â€ adds to the series is a co-op system. Although a well implemented feature, a few more game play changes would have been welcome. The co-op system will put Sheva at your side throughout the entire game.

She can engage enemies, watch your back, and help you cross certain obstacles you encounter. Her AI is competent for the most part, although a few situations can cause problems. In an area that requires you to move through quickly to dodge a trap, for example, Sheva tends to walk right into it, killing herself.

She will also tend to go in her own direction, in some rare cases, when you want her to follow you. Luckily, there is the option for someone else to control her, either through split screen or online play. With someone in control of Sheva, you will find a couple of areas a lot less frustrating, but the game is still easily completed by just using her AI.

The old inventory system of â€œResident Evil 4â€ has been scrapped as well. Chris and Sheva each have nine slots to store weapons, items and ammo. They can also swap items during the game. Unlike previous games, the action is not paused when you open your inventory, so swapping weapons and supplies in the middle of a boss fight is not recommended.

Unfortunately, you will find the system a bit annoying once you have acquired more weapons. Deciding who gets what weapon and micromanaging herbs, ammo and grenades, all while dodging enemies can be a pain. You will have the opportunity to store items and weapons in between chapters and when you begin playing, however.

The game flows smoothly as you fight your way into different areas. The boss fights are well placed and most of the time, you won’t even realize one is right around the corner. The fights themselves are intense, requiring you to follow the button prompts on screen to dodge attacks, all while you’re busy unloading ammo and using the environment to defeat the creature.

Some of the fights are a bit too easy but still enjoyable. The cut scenes that require you to press the right button combo or die also make a return in this game. These can cause a headache if you happen to miss one at the end of the scene and have to watch the whole thing over again.

â€œResident Evil 5â€ only takes around 12-15 hours to complete on your first trip through, but offers a huge re-playability factor. The â€œMercenariesâ€ mini game makes a return but with a new twist: online play. You can also collect all the PS3 trophies for hunting all the treasure in the game, shooting all the hidden BSAA emblems, beating the game in a harder â€œProfessionalâ€ mode and tons of other unlockable features to keep you busy for a long time.

The graphics and environments are visually stunning. As you trek into different locations, you will notice the high level of detail that went into making them. All of the bosses, twisted creatures and character models are also highly detailed. The movement animations are flawless, and the cut scenes are high quality and action packed.

The music fits the atmosphere of the game, too. It gets a little too quiet when no enemies are around; making you wonder what is lurking ahead. When you are in the middle of a crucial boss battle, the music picks up and sets the mood perfectly.

You can also expect more of the â€œResident Evilâ€ trademarked cheesy dialogue and out of context one-liners in this game, as well. When Chris and Sheva interact in the game, they do repeat the same things over and over again, which can get on your nerves after a while. It’s certainly not game breaking, though.

â€œResident Evilâ€ may not be a survival horror series anymore, but don’t let that stop you from trying this game. Change is not always a bad thing, and Capcom has pulled this one off quite well, even though fans of the original games may feel left in the dark. Sometimes games need to evolve in order to attract a new audience and offer new experiences for fans; otherwise, they will get boring and repetitive over time.

For both newcomers and fans of the series who are willing to accept the new direction, â€œResident Evil 5â€ offers stunning visuals, a great story and an amazing replay value that make it a worthy addition to your game collection.