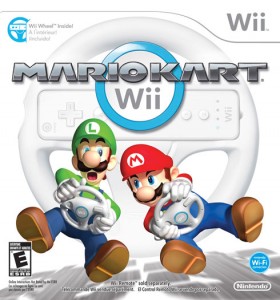 A staple in the Nintendo library for over a decade, Super Mario Kart has established itself as a top shelf video game franchise by consistently giving gamers what they want.

Through the years, every game in the series has added something different to the winning formula, making the game a better overall experience. Mario Kart Wii, while suffering a few letdowns, mostly due to the system its on, rather than the gameâ€™s design itself, is a more than adequate sequel that continues this trend by offering the best graphics in the series to date, combined with an intuitive control scheme and more online options than ever before.

As soon as this game is inserted into the Wii, long-time fans of the series will fall in love it, as itâ€™s soaked in the nostalgia that comes with being a revered and uber-successful game franchise. However, at first glance, the game will seem like a beefed up version of Mario Kart DS, as many of the same tracks from the DS version (in addition to tracks from the SNES, N64 and Gamecube versions] find themselves in the Wii version.

However, for those that look just a little bit closer, there are a bevy of new options available that easily make this the deepest Mario Kart of all time.

The new tracks, for instance, are some of the most innovative and enjoyable in the series’ history. Tracks like Toadâ€™s Tunnels will force you to time jumps across mushrooms in what is one of the most intriguing racing experiences one can have, while Warioâ€™s Mines is a different experience altogether, featuring plenty of narrow pathways that make it extremely tough and extremely â€œWario.â€

All in all, there isnâ€™t a bad track in the game, even though some will find a few much more difficult to master than others.

While the new tracks give the game a breath of fresh air, the addition of motorcycles also adds a bigger element of speed than the game had before. Nonetheless, the most interesting gameplay feature added is the ability to perform mid-air tricks, by wiggling the wii-mote (or steering wheel) when jumping. After performing the trick, youâ€™ll be rewarded with a momentary speed boost, which will help you steal the checkered flag. Some tracks, particularly the ones from older games, donâ€™t truly take advantage of this new option, but for the most part, itâ€™s something the series brings in that gives this reiteration of the franchise a more exclusive feel.

New tracks and new control options aside, this version of Mario Kart will eventually be remembered for having the deepest online options of any other Nintendo game previously. Pretty much every gameplay mode is available in some sort of online mode, making the game play great with others and worthwhile for anyone who wants a serious challenge.
Nonetheless, the Wiiâ€™s online capabilities are still seriously lacking compared to the online configurations of its current generation counterparts.

This game would have been even better if players could have somehow communicated over a headset and been able to keep track of their friends with more ease. Above everything else, this game proves that Nintendo has some serious thinking to do about how it packages its online titles.

Despite those feelings some will have with how the game is presented online, the experience is still an enjoyable one that unfortunately could have been even better.

Unlike the online part of the game, which is solid, but could have been great, Mario Kart Wii, as a whole, is an absolute blast that is destined to find its way into your home if you own a Wii. The new steering wheel controls are great, the gameâ€™s graphics are better than ever [even though they donâ€™t eclipse the GC version by much] and there are plenty of unlockables and gameplay options to keep you busy for a very long time.