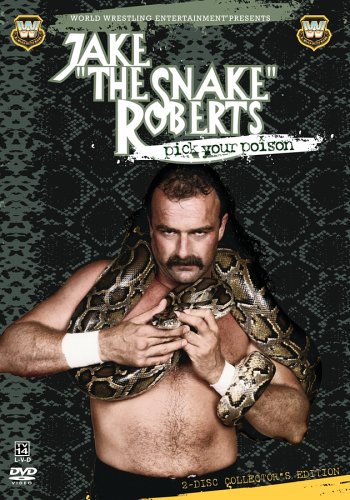 Often in life, itâ€™s not the person with the most talent that makes it to the top; itâ€™s the person that uses what ever talent they may have in the best way they can that winds up accomplishing their goals.

For over 20 years, the world of sports entertainment featured this type of individual, Jake â€œThe Snakeâ€ Roberts.

Never the most athletic, or ever in the best shape, Roberts mastered the art of ring psychology and was one of the first wrestlers in his era truly able to captivate an audience in an interview, becoming a true pioneer in professional wrestling, amassing millions of fans in the process.

In a DVD by WWE home entertainment entitled â€œJake â€˜The Snakeâ€™ Roberts: Pick Your Poison,â€ Robertsâ€™ storied and tragic career is chronicled by none other than â€œThe Snakeâ€ himself, giving details about how he created the most imitated move in wrestling history, the DDT and how he fought and lost his battle with drugs and alcohol.

When you listen to Roberts tell his story, itâ€™s obvious to see that his accomplishments in the ring, no matter how fantastic they were at one point in his life, will always play second fiddle to the amount of pain and suffering he endured as a child due to tremendous family problems and his problems with drugs and alcohol.

Rather than just play for the viewing audiences pity with a somber story of regret and pain, Roberts truly understands what he has done in his life and doesnâ€™t try to hide the truth from anyone. Roberts even goes as far as to explain the reasons how he got addicted to drugs in the first place, trying to escape from a horrible neck injury that forever ruined any chance he had to maintain the super-stardom he worked so hard to accomplish in his career.

Aside from the two-hour documentary that gives a never before scene look into the life of Roberts, this two-disc collectors set contains great matches from Robertsâ€™s days in WWE, WCW, ECW and Smokey Mountain Wrestling with wrestling greats Ricky Steamboat, Justin Credible, Rick Rude and Sting.

By the end of the 2-disc collectors set, any wrestling fan will realize just how talented Roberts was and what a shame it is that drugs and alcohol ruined a great career that could have been so much greater.

Often imitated, but never duplicated, the greatness that once was Roberts will forever live on in this great DVD compilation.