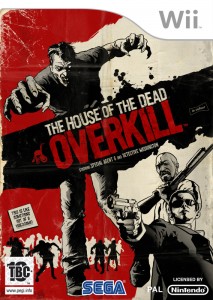 Overkill? Far From It

One of my favorite memories of childhood is going to the only arcade in my neighborhood to play “House of the Dead” inside one of those cramped dark cabinets with the greasy, broken guns with long awkward cords that, no doubt, some little gremlin had put in their mouth (or worse.)

Having grown up on zombie movies and cop shows, undead shoot-em-ups combine everything I loved about being a little girl.

To be honest, apart from bounding home after school to go waste pockets teeming with quarters on “The House of the Dead” series, I haven’t much kept up with it. Nearly all the arcades have been shut down over the years and I never owned a Sega, nor did I play any of the console releases. I had my doubts, especially as a newcomer to the Wii, that “HOTD: Overkill” would provide me with a fraction of the entertainment that the old, filthy, badly lit arcade game had.

I walked into Best Buy with every intention of buying Wii Fit, and saw the Nyko Perfect Shot guns right next to the balance boards.

I suddenly remembered my brother telling me he had wanted to get it because it was “sick.”Â  So I opted to get the guns and Overkill instead.Â  When I came home, I had no idea what was going to ensue.

Within moments of putting the game on, I was taken aback by the level of cursing (in a good way.)Â  “Overkill” made it into the Guinness Book of World Records for 189 instances of the F-bomb in a game (not to mention the chorus of profanity that does not include.)

I felt like I was watching a Samuel L. Jackson flick rather than playing a game. The cutaways were funny, though still not as neat as I would expect for a console game of this generation. The character dynamic between Agent G and Detective Isaac Washington provide comic relief that balances out the gore, making it more like an interactive movie than a game.

As we got further into the game, shouting and dodging around my apartment as if we were actually being attacked by zombies, I realized that the guns were a great choice. I don’t know if I would have had half as much fun if I was just pointing the WiiMote at the screen.

White and plastic it may be, but the Nyko Perfect Shot gun brings back that feel of being in an arcade sans the quarters.

Your task as Agent G is to investigate some missing people in a small Louisiana town as well as bringing down Chinese takeout enthusiast and crime lord Papa Caesar. Throughout the duration of the game, you seek out Caesar whom you narrowly miss apprehending in each episode.

Between horrific mutant experiments and the almost Hitchcockian maternal obsession that prison warden Darling possesses, “The House of the Dead: Overkill” hardly disappoints in terms of shocking plot lines.

Perhaps the absolute coolest aspect of this game is the ability to dual wield your weapon. Of course, you can only access this feature by completing “Director’s Cut,” and then you will be able to play one-player story mode with two guns (or WiiMotes, but honestly… that is not going to look half as cool.)

I’ve always complained about the lack of authenticity when dual wielding when playing the Halo series, as there’s just some missing element if you’re pressing buttons on one big bulky controller. Taking the time to go through it is absolutely worth the ability to pretend you’re badass, even if you’re only rolling around your own living room floor and ducking behind a bookcase. Of course, you could always just cheat and play two-player mode by yourself… but where’s the sense of accomplishment in that?

My brother and I won’t stop playing this game. The mini-games are sort of fun and provide a nice distraction from regular gameplay. The music, although pretty decent at first, wound up getting stale fast and I opted to mute it and blast my own zombie-killing soundtrack.

Much like a decade (or more) ago, we are still constantly yelling at each other to stay on each other’s side of the screen. There’s nothing better than a two- player rail shooter— you don’t have to wait for the other player to get to your side of the screen (a hassle if you’re playing with a fair-weather gamer). It’s simple to follow along. It’s easy, fun and entertaining even if you’re not a hardcore gamer. And, quite possibly the my favorite part of this game, there’s that jump-back moment every time a zombie manages to get a swipe in on you.

I actually dread the day that gaming can break the barrier between mere simulation and Matrix-style internalization of gameplay, because that is when I will finally actually take a heart attack while playing one of these severely messed up, gory as hell games that I love so dearly. Even with graphics that I personally feel could be a lot crisper in this day and age, it is the most fun I’ve had in years with any console.

Way too much promo through the first half of this weekâ€™s Impact Wrestling tarnished a solid X-Division Battle Royal and...