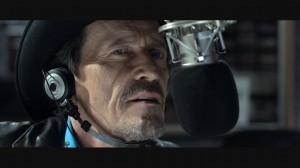 â€œPontypoolâ€ is a zombie movie thatâ€™s pretty low on zombies â€“ we donâ€™t even get to see them until the third act. Thatâ€™d be fine if there was something interesting to look at in the meantime, but everything that happens by then is kind of underwhelming, and by the time the zombies get to parade around onscreen, the movie has become so flat that it doesnâ€™t even matter. That it would take some time for events to unfold seems reasonable, just as long as the process goes somewhere. This one doesnâ€™t.

Stephen McHattie plays a shock jock named Grant Mazzy, who wears a cowboy hat that makes him look a lot like Don Imus. Like Imus, Grant has a big mouth that lands him in lots of trouble â€“ after a big network fires him for some vulgar comments, he winds up at a tiny station in Pontypool, Ontario, where heâ€™s reduced to announcing school closings and traffic reports. His producer, Sydney Briar (Lisa Houle), tells him to avoid the hot topics, but he still does what he can to inject controversy into everything.

Most of what comes in through the newswire is pretty ordinary stuff, until reports start coming in about a number of attacks â€“ the citizens of Pontypool are dealing with a mental disease, which turns their speech to babble and makes them attack the uninfected. When he hears that Pontypool is being quarantined, Grant decides itâ€™s best to stay at the radio station, which is later infiltrated by Dr. Mendez (Hrant Alianak), who tells Grant and Sydney that he knows how to stop the epidemic. He says that the key to the virus is hidden in the English language, and that people who say the wrong words risk becoming infected. Thatâ€™s not something you want to hear if you host a radio show for a living.

If you think about it, itâ€™s kind of weird that â€œPontypoolâ€ doesnâ€™t work, especially since it employs the same style that Alfred Hitchcock favored. In his famous book-length interview with FranÃ§ois Truffaut, Hitchcock said that suspense is more rewarding than surprise and that delaying the action onscreen gets the audience more involved. He said that if thereâ€™s a bomb underneath a table where people are sitting and the audience knows beforehand that the bomb is there, the scene becomes anticipatory by taking its time with the explosion. That might be an appropriate analogy for â€œPontypool,â€ where thereâ€™s very little action up until the conclusion, but in this case, the only bomb here is the movie itself.

Stephen McHattie is awesome in this flick as the badass cross-section of Howard Stern and Don Imus. This isn’t your average zombie flick and if you go into it expecting “Dawn of the Dead,” you’ll be sadlyÂ disappointed. As a thriller more and a zombie flick less, this film is scary, funny and will make you think about the genre. While many zombie movies retain the same type of formula, this picture tried something completely different and is special because of it.