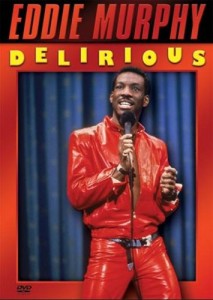 â€œDeliriousâ€ is the standup routine that got everyoneâ€™s attention back in 1983, when Eddie Murphyâ€™s career as a superstar began. Remember that this was when he was still the golden boy on â€œSaturday Night Live,â€ where he had to work all of his material around the censors. Even then, he was usually wild enough to steal the show, probably because he understood the value of surprise â€“ his biggest laughs depended on imagination and shock, which his early days in standup mightâ€™ve helped him develop.

Even though it didnâ€™t take long for him to get there, by the time he appeared in â€œDelirious,â€ he was at the top of his game.

Of course, the comedian has come a long way since then. Murphy eventually left standup to star in a bunch of movies, which did pretty well at the box office during the â€™80s and â€™90s. His recent works, on the other hand, have gotten kind of silly: Now heâ€™s playing a dad whose daughter gives him business advice with some help from her make-believe friends in â€œImagine That,â€ which hit theaters in enough time to cash in on Fatherâ€™s Day. Projects like this have cost him a great deal of respect, which might be why thereâ€™s a new edition of â€œDeliriousâ€ on DVD â€“ to remind everyone why they had respect for him in the first place.

His routine worked because he allowed people into his life. When he recalled some of the stuff he went through as a kid, he came up with some of his most successful material, like the bit he did about his familyâ€™s barbecue. Lots of kids have to deal with fathers who get drunk and yell at everyone, which is something they might learn to laugh at when they get older. Murphy trusted his audience enough to let it feel his pain, and was insightful enough to understand why it was funny. It helped that Murphyâ€™s impersonation of his father felt truthful â€“ thatâ€™s not something you get when you see him as the dad in family comedies.

Although a great deal of what Murphy said that night was pretty edgy (even his celebrity impersonations were kind of off-color), some of it was so extreme that he would regret saying it. Part of his act included gay jokes that sound pretty awkward today, even though he probably wasnâ€™t thinking about who he was offending back then. He made things worse, though, when he talked about people with AIDS, which was kind of dangerous at a time when lots of people knew next to nothing about it.

Years later, he said he was sorry for being insensitive to the gay community and people with HIV, but itâ€™s a shame that material like this tarnished one of the most popular standup routines of all time.

Some good came out of it, however â€“ his followers learned from his mistakes. Chris Rock, whose success in standup picked up where Murphyâ€™s left off, dealt with homophobia during his â€œBigger & Blackerâ€ special in a way that got big laughs without being mean-spirited. â€œBigger & Blackerâ€ did for Rock what â€œDeliriousâ€ did for Murphy: Transform a young star into the king of comedy. For what itâ€™s worth, though, â€œDeliriousâ€ was biggerâ€¦and probably blacker, too.