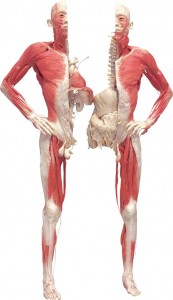 It’s not for the weak of stomach, but definitely for the strong of mind.

The ever-famous â€œBodies: The Exhibitionâ€ at the South Street Seaport in New York City offers a once in a lifetime look into the human body and forces viewers to simultaneously look inside themselves.

Upon walking into the exhibit, you’ll notice the absence of light and cool temperature, making for a comfortable overall atmosphere, but make no mistake about it, once you leave, it’ll take a while for you to look at the world and yourself the same way again.

Simply put, never before has the human model been showcased in so many different ways.

However, things start off slow in the exhibit and for good reason. Seeing preserved bodies takes a bit of getting used to.

For those who haven’t been to anything like â€œBodies: The Exhibitionâ€ before, the process in which the bodies are preserved, called polymer preservation, includes preserving human tissue by using liquid silicone rubber and replacing the water and fatty material in the cells of the body by acetone and then by a liquid silicone.

The end result is an amazing specimen that is hardly believable the first time you lay your eyes on it.

Nonetheless, it is, without a doubt, real.

That alone, may be too much for some people to handle, but those who can control their stomachs will find a wealth of information and sights their eyes won’t see anywhere else.

The cross sections of some of the models reveal parts of the body that are amazing. Seeing someone cut literally in half and looking at cadavers with artificial hips and knees from various angles are some of the highlights of the exhibit. While that act is great in itself, the fact that you can get as close as you want and look for as long as you’d like is what makes the exhibit so much fun in the end.

That is because there are more than dissected cadavers at the exhibit, as the entire inside of the body is shown in ways never seen before. Preserved intestines, circulatory systems, hearts, lungs, brains, prostate glands, you name it, the entire smÃ¶rgÃ¥sbord of the human body is on exhibit, which will make you look at your own body in semi-disgust and fascination by the end of your trip.

Things do get a bit rougher to digest as you go through the exhibit however, as smoker’s lungs and various stages of fetal development are featured. You do have the option to skip the latter section and go on to another room if you prefer.

In spite of this, those exhibits are perhaps the most thought provoking and surreal sections of the tour, making one think about what a pack of cigarettes a day does to your body [you even have the option of throwing out your cigarettes while you are there] or when you too, were that small. Some could say that this section makes the exhibit a tough one to bring children to, but without outside connotation, it serves as an excellent learning experience. Cards lay next to every exhibit and several staffers are always available to assist you as well, making the processing of the abundance of information that is there a less daunting task.

Essentially, â€œBodies: The Exhibitionâ€ is a place best served for those who can leave their misconceptions about the act of preservation behind the door they enter and take in the wealth of knowledge and sights that aren’t available anywhere else.

Again, it may take some getting used to at first, but by the end of the exhibition, you’ll look at your body and the bodies of others much differently.

Because of that, the exhibit can easily be viewed as a successful one, but one that must absorbed with an open-mind to fully appreciate.