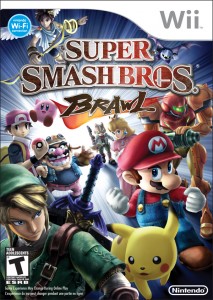 Over the past two years, Nintendo has manÂ­aged to hold its own in the console wars by relyÂ­ing on home-grown titles and sequels to already popular games. With the success of games like â€œWii Sports,â€ â€œWarioWare: Smooth Moves,â€ â€œWii-Fit,â€ â€œPaÂ­per Marioâ€ and â€œBig Brain Academy,â€ it seems that Nintendo’s future rests on the successes of its most cherished franchises. With that beÂ­ing said, a game like â€œSuper Smash Bros.: Brawlâ€ was destined to become a million-seller months before it came out. Nevertheless, the sequel is not only one of the best games currently availÂ­able on the system, itâ€™s easily the best game in the series.

Sporting some of the best graphics on the system to date, â€œSuper Smash Bros.: Brawlâ€ is a feast for the eyes. Never before has a game in this series looked so solid. From the colorful backgrounds to the hair and body effects of the characters, everything looks fantastic and will be a driving force in why you become addicted from the first time you turn the game on.

Featuring over 35 characters and online support, â€œBrawlâ€ is the deepest and most enÂ­joyable title on the Wii. With classic characters like Mario, Kirby, Pikachu and Link, in addition to Solid Snake and Sonic the Hedgehog being added to an already beefy lineup, Brawl has a character that everyone will enjoy playing. ConÂ­sidering how different the characters are from one another, avid fans of the series will have an absolute blast playing through the game with each of them.

However, if there was a reason to play â€œBrawl,â€ it would to strut your stuff online. HavÂ­ing the opportunity to play with a classic conÂ­troller, GameCube controller or the Wiimote, every player under the sun has a reason to give this game a shot. While it doesnâ€™t feature voice chat or any of the other little nifty opÂ­tions available on other current generation platforms, it does offer a more than sturdy gameplay experience that is always full of opponents and virtually lag free. When NinÂ­tendo finally mustered the courage to foray into online gaming, itâ€™s obvious that this was the kind of experience they were shooting for: One that is free, fast-paced fun for evÂ­eryone involved.

Also new in this addition to the series is the ability to take pictures and video of your in-game exploits and send them to people on your friends list. This option gives the game even more replayability and gives you another thing to do in an already deep game. Even after playÂ­ing through the game and unlocking everything, you may find yourself taking pictures of your characters and sending them to your friends.

When the sum of its parts is added up, â€œBrawlâ€ has it all: Amazing graphics, a bevy of gameplay options and every control option you could think of, making it a must own game on the Wii and a reason why sequels may not be so bad after all.

Ring of Honor Coverage: Lethal Too Strong for Roddy

This was probably the best week of Ring of Honor on Destination America yet. We get it now. This show...