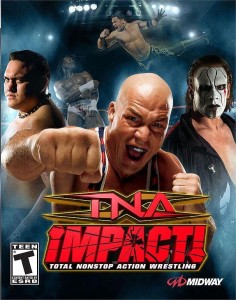 When “TNA Impact!” was in development last year, Midway LA studio head Scot Lane said on numerous occasions that the game was going to mirror N64 wrestling titles such as “WCW Revenge” and “WWE No Mercy” because that’s what he believed the fans wanted.

While he was spot on with that conclusion, as the genre hasn’t been the same since THQ and AKI developed those classics, the end result of this game won’t exactly quench hardcore wrestling fans’ hunger for a new must-own title.

Instead, they’ll appreciate the steps Midway has taken to make this a better than average game, but resent them for not taking it the step further it needed to be truly great.

Everything in this game, from the graphics and the controls, to the create a mode is done to a solid enough level to where the game is playable and semi-enjoyable, but not taken to a level of exemplary.

Because of this, it may be one only truly enjoyed by super fans of the company.

For instance, while the character models are easily the best of any wrestling game to date on the 360, as characters sport everything from signature tattoos and scars in vivid detail, the animations are repetitive. There are also numerous collision detection problems that make some of the moves not nearly as spectacular as they are in real life. Even worse, at times, you’ll miss a dropkick or clothesline when your enemy is right next to you, [making you feel like you’re playing the original WCW game on the NES] which is a problem against a cheap, inconsistent and difficult A.I. that gives you no time to breathe. Against players online, it’s not a huge problem because the problem will bother both players, effectively canceling itself out.

Does it ruin the gameplay experience? No, but it is the first blemish on a cute girl next door that could have been a super model. Simply put, there aren’t enough animations to distinguish characters from one another and combined with the collision detection problems, the game can become tedious at times. When you have such a wide array of characters with any amazing repertoire of moves like TNA does, this point should have been stressed much, much more.

The same thing goes for the controls, as they are inspired from great games and as solid, but lack the same precision as the titles it takes a note from. For instance, there are no back grapples and players will find it hard at times to pull off their signature moves. For some reason, button responses aren’t as fluid as they should be, making it very difficult at times to do exactly what it is you want to do. Once you get a feel for the small delay however, the game is enjoyable to play, but by that point many novice gamers will want to play something else.

The lack of extra options also hurts “TNA Impact!,” as only 25 wrestlers are available. There are a bevy of match modes that spice things up a bit, including the always fun Ultimate X match, but with extremely thin story and create a wrestler modes, only hardcore fans of the company will truly be enthralled by the extra options.

With over 60 wrestlers currently on the company’s roster as well, Midway has no excuse as to why more wrestlers weren’t featured.

While those problems merely hurt the experience, the minuscule moveset in the game practically tarnishes it completely. Aside from their respective finishing moves, most of the characters use moves that the others do [sometimes it feels like all the characters have the same moveset], robbing the game of the uber authentic feel it could have had.

As a matter of fact, some use moves that characters perform in the game, they’d never use in the ring in real life.

Sting, Kevin Nash or Scott Steiner jumping off the top rope like an X-Division star?

These problems will bother huge fans of the sport and the company and may even possibly cause them to stay away from the game entirely.

Nevertheless, in spite of all of these problems, “TNA Impact!” is still a fun multi-player romp and a wrestling game that can provide hours of fun.

That doesn’t mean it couldn’t have been much better than the sum of its parts though.