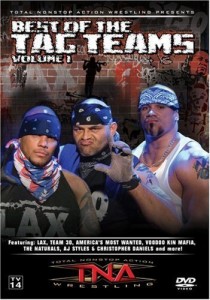 In the 1980s, when professional wrestling was at its peak in popularity, tag team wrestling, too, was widely admired by fans. Teams like the Road Warriors, the Rock and Roll Express, the Horsemen and the Hart Foundation were just as popular as the singles competitors that appeared on posters on the walls of teenage boys all over the country.

However, in its waning popularity over the past three years or so, Tag Team wrestling in most promotions have started to look like a thing of the past.

One promotion however, Total Nonstop Action, has made Tag Team Wrestling a priority over the past few years and as a result, is probably one of the only promotions left with a healthy roster of teams that fans find exciting. Recently releasing â€œThe Best of the Tag Teamsâ€ on DVD, TNA has put over 15 amazing matches from five different teams on one disc, which ultimately ends up being a must own for any wrestling fan who misses the good old days of the sport.

Chronicling the best matches of Americaâ€™s Most Wanted, Team 3D, The Voodoo Kin Mafia, The Naturals and The Latin-American Exchange, this DVD is living proof that tag team wrestling still has a place in the sport. Other great tag teams appearing in the DVD are AJ Styles and Christopher Daniels, Sonjay Dutt and Jay Lethal and Team Canada, which all have their own different styles and give the collection of brevity not found in many wrestling compilations today.

Also adding to the multifaceted nature of the DVD are the matched selected, ranging from standard tags, to hardcore matches and six sides of steel blood fests, giving the purists and the hardcore fans exactly what they.

However, while the matches themselves offer plenty of diversity for the eclectic wrestling fan, the amount of finishing moves shown in this DVD is absolutely fantastic. It sees that almost every wrestler featured on the compilation gets to pull off their finisher on more than a few occasions, giving every match a sort of main event feel to it. Watching Homicide pull of the â€œGringo Killerâ€ or Team 3Dâ€™s finisher through a table a few times is definitely an easy way of gluing an audience to their seats.

With that being said, this DVD has a luster and polish that will make those that could care less about Tag Team Wrestling or the sport as a whole, instant fans.

After watching 210 minutes of some of the best wrestling today, one thing becomes painfully clear, this DVD is a must own. Anyone who misses the days of the Monday Night Wars or just wants to watch some of the most athletes in the world do what they do best owes it to themselves to pick up what is easily one of the best wrestling DVDs out right now.