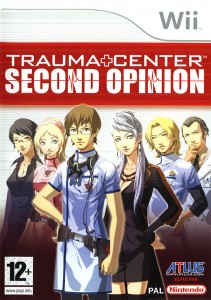 Anyone that played the original version of Trauma Center on the Nintendo DS when it was released two years ago, knows how fun, challenging and entertaining the series can be.

However, upon its release on the Nintendo Wii, some of the series’ biggest fans wondered if the gameâ€™s publisher, Atlus, would be able to bring the same kind of addictive gameplay to a next generation console.

Luckily for them, not only does Trauma Center: Second Opinion on the Wii provide a solid gameplay experience that will entice fans of the series and bring in new ones, it uses the Wii-mote and nunchuck in a way that almost makes you feel like an actual surgeon yourself.

Using the Wii-mote as your pointer and the nunchuck to pick which tools you wish to use during operations, itâ€™s never been easy to cut someone open and stitch them back up again, good as new. Having such an emphasis played on successfully controlling the hands of the surgeon makes Trauma Center: Second Opinion extremely nerve-racking to play, but extremely rewarding at the same time. The only problem is that each operation is timed and each patientâ€™s health needs to be monitored very carefully. Taking your time using a scalpel, or failing to remove a tumor in time can result in a patient flat lining and possibly dying, thus ending your game.

Helping you make sure your patient doesn’t die on the operating table are a host of characters, including nurses, interns and doctors, that guide you through the operations until you know what youâ€™re doing. This kind of assistance during gameplay by the computer makes learning the ropes of a surgeon a fun and interesting journey.

Also making the adventure worthwhile is a solid storyline that is extremely entertaining. Following the career of the young and rambunctious Dr. Stiles, whoâ€™s trying to find his way in the big city, Trauma Center: Second Opinion feels like an anime version of the Emmy Award-winning TV show ER and is filled with twists and turns that keep the gamer wondering whatâ€™s going to happen next.

With such a solid story and control that makes you feel like youâ€™re actually performing the actions on-screen, the graphics in Trauma Center: Second Opinion donnâ€™t play as huge a part in the gameâ€™s success as you would think. Slightly better looking than what you would expect this game to look like if it was on the Gamecube, Trauma Centerâ€™s anime-inspired graphics do a solid job of showing the player the inside of the human body, but donâ€™t blow your mind.

The vivid colors used in background during cut-scenes and beautiful drawn-in characters also get the job done and take nothing away from the additive and entertaining experience the game affords.

Simply put, any fan of the original Trauma Center game on the DS will absolutely fall in love with its big brother on the Wii, while anyone else looking for an entertaining and enjoyable game that uses the Wii to its fullest capabilities should look no further as well.