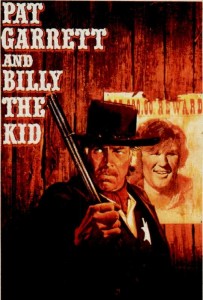 Director Sam Peckinpah’s (“The Wild Bunch”, “Straw Dogs”) mind was beginning to rot away in the early seventies due to his alcohol and drug abuse.

Before his mind had managed to completely spoil though, he hadÂ one more epic film left in him.

“Pat Garrett andÂ Billy the Kid” was that film.

Â TheÂ epic scope of the movie is a testament to all that we miss in Peckinpah.Â He was a man that single-handily reinvented the Western genre that was set before him. His films were often cited for being ultra-violent, but were actually accurate portraits of the Old West.

He didn’t commercialize or romanticize the horrific past as had many films before him.

This 1973 film has everything a movie-lover could possibly want. It is filled with beautiful Western imagery. An early scene shows the wonderful character actor, Slim Pickens’Â (“Dr. Strangelove”), death as he goes down to his favorite lake for the slow death his bullet wound has caused him, while Bob Dylan’s “Knocking on Heaven’s Door” is playing in the background. Although the scene lacks sentimentality, the direction is handled stunningly.

Peckinpah was always one to make bold choices and the casting of the lead was no exception.
Country legend, KrisÂ Kristofferson (“Heaven’s Gate”), was cast as Billy the Kid. Kristofferson is calm and cool as Billy. He portrays him as a conflicted gunslinger that tries to do right whenever possible. He is loyal to his friends and kills only when he has no other choices. The then 36-year-old Kristofferson plays a 21-year-old, but that does not detract the viewer from the movie. Kristofferson was one of the few musicians at the time [and today] that had no problems crossing over to the film scene.

A supposedly good time for Kristofferson, as the set was actually the location where he met his wife â€“ singer Rita Coolidge â€“ and where he managed to strike up a friendship with the director, in spite of their many infamous verbal brawls.

The very same that many cast members were afraid would to lead to some thrown punches, but then again, the director did have a reputation for being a little on the hard side.

Peckinpah often directed actors by trying to push them to their breaking point, but that actually helped to mold Kristofferson into a good actor. The following year, he went to work for Martin Scorsese in “Alice Doesn’t Live Here Anymore.â€

The other major complement to the supporting cast is veteran actor and double-Oscar winner Jason Robards (“All the President’s Men,â€ “Julia”)Â as Governor Wallace.
Â
Then for the cherry on top of the casting cake, we have screen tough guy,Â James Coburn (â€œMaverickâ€) as Pat Garrett. Garrett was a former friend of Billy the Kid, who then finds himself trying to kill him. Because of this, Coburn’s performanceÂ allows us to feel as conflicted as he is. He doesn’t want to kill Billy and gives him every chance possible to leave town.
Â
A lesser actor would probably easily playÂ Pat as a straight out bad guy, but Coburn provides a dual layer in thisÂ role, effectively providing the much-needed complexity for such a deeply-layered role.
Â
With a great cast in place, all that is left is for Rudy Wurlitzer (“Two-Lane Blacktop”) to transport us to that time and he does. Wurlitzer manages to keep some of the historical facts and rearrange certain aspects to provide one truly entertaining film. Â His screenplays did not traditionally rely heavily on dialogue, but instead focused on expressions and the actions of the characters.
Â
To further explore this, see Dennis Wilson, (Beach Boys)Â and James Taylor’s performances in “Two-Lane Blacktop.” The characters are never even referred to by their names at any point in the film, because that isn’t needed for the story. It is straight forward storytelling turned into movie magic.
Â
This film is a true representation of “When Tough Guys Ruled the Cinema “– a classic in every sense of the word and imaginative journey to a time we will never live through.
Â
Peckinpah was such a passionate artist that when the studio re-cut his film, he happily peed on the movie screen. If a director believed this strongly in his film, don’t youÂ owe to yourself to check it out?

Only if you’re interested in exploring an era of brilliant and passionate film-making.