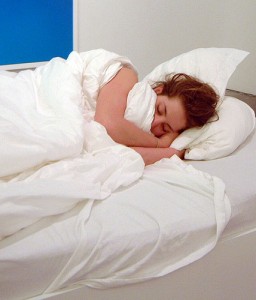 The first thing you see at the New Museum of Contemporary Art during their exhibition of â€œThe Generational: Younger Than Jesusâ€ is a colorful patchwork banner with various quotes on it. Itâ€™s accompanied by a bunch of cardboard on the floor, which mightâ€™ve been the model of a city at one point in its life.

The whole thing is part of a project called â€œBuilding Rome in a Day,â€ all of which was executed within 24 hours: Artist Liz Glynn got some people to help her put it together, then helped them destroy the model of Rome to complete its history. Whatâ€™s left is an interesting mess of creativity, with parts that seem to challenge each other instead of working together as a whole.

Itâ€™s kind of an appropriate metaphor for the rest of the exhibition, which combines a bunch of stuff that doesnâ€™t go together. Thereâ€™s so much here that the show takes up four entire floors, but none of the 50 artists represented here really stand out. It mightâ€™ve been better if somebody had put some more thought into this â€“ it makes no sense to put a video game by Mark Essen called â€œFlywrenchâ€ right next to the sleeping participant of â€œThis is XXâ€ by Chu Yun. It kind of makes you wonder how she can sleep with all that noise.

All these artists have in common is the fact that theyâ€™re under 33, a concept thatâ€™s not strong enough to support an entire show. Itâ€™s kind of a shame that none of the artists here got their own exhibition, especially since a lot of them are pretty well-rounded. Matt Keegan, whose photography and sculptures are on display here, creates some interesting art that gets a lot of attention. The disembodied subjects of â€œHands Almost Across Americaâ€ make the whole thing seem funny, lonely and weird at the same time, while â€œ23 Pictures of 22-Year-Oldsâ€ shows more than its title suggests. Keeganâ€™s artwork makes you want to see some other stuff by him, but this exhibition doesnâ€™t give him the attention that he deserves.

Thatâ€™s actually true of lots of the other artists who turn up here, who deserve a better forum than the one theyâ€™ve got. The idea here was to focus on art that defines a generation, but a great deal of the effect gets lost in translation. If you think about it, though, that might be a sign of the times â€“ everything in our time feels like an assault on our eyeballs and eardrums. If the message here is that our generation is used to being told what it wants, then maybe some of the artwork shouldâ€™ve been placed near the exit.