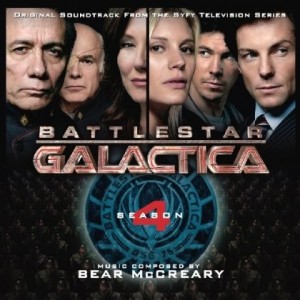 The album is a daunting testament to McCrearyâ€™s prowess as a television composer. An instrumental orgasm for choir, orchestra, percussion, ethnic soloists and even a few of the cast members that complements the end of the fleetâ€™s long journey.

This is more rock opera than space opera.

Brimming with pulse pounding excitement, disc one compiles the best of season 4. â€œGaetaâ€™s Lamentâ€ kicks off the epic collection with Alessandro Juliani, the actor who portrayed Felix Gaeta, offering his formidable vocal talents. Simply beautiful to listen to as the pain and hope swell to a crescendo in signature McCreary style, that keen sense of the larger story.

â€œThe Signalâ€ returns with a heightened urgency to the war drums and electric guitars that have become staples of the seriesâ€™ musical identity. But added to the mix is the wonderful choral accompaniment meant to underscore a miraculous discovery amidst the dread of nuclear standoff. â€œThe Cult of Baltarâ€ finds its legs upon the vocals of series regular Raya Yarbrough in an eerie incantation of womanly power and obsession. Her throaty sexy voice coats the track in a strange and enticing siren like call that builds to a rocking climax that just overwhelms you by the end.

â€œBlood on the Scalesâ€ recalls some of the more memorable events on the series. The track is all about the tension and release of a mutiny become affirmation of our central characters. With statements of familiar character themes reaching larger than life proportion itâ€™s hard not to succumb to a goosebump inducing coma. At its heart are the first and only appearance of Zarekâ€™s Theme (played by Richard Hatch) and the use of the Biwa and Shamisen, giving the track a sense of Kabuki Theater. The frakking thing is an all out war in musical terms.

Even toward the end, McCreary and co. never stopped experimenting.

The entirety of disc one straddles genre and style. From Dredilide Thraceâ€™s piano sonata to the rousing reworking of last seasonâ€™s cover of â€œAll Along the Watchtower,â€ called â€œKara Remembers,â€ McCreary challenges expectation with each successive track.

Disc two boasts the hour of music written simply for the two part series finale titled â€œDaybreak.â€ Track one on the disc called â€œCaprica City, Before the Fallâ€ transports the listener back to an ordinary life without war or struggle, only to give way to the strange days ahead as ethic riffs close out the track.

By far the most engrossing part of the second disc is â€œAssault on the Colony;â€ fifteen minute slug fest of percussion, woodwind and string orchestra exploding into a storm of cataclysm befitting humanityâ€™s desperate last stand.

A provocative send off to a provocative collection, â€œThe Passage of Timeâ€ is the last brief gasp on the album ending on a mysterious note of things to come.

The album is the sum of the evolutionary process of the composer, performers and series as a whole. Itâ€™s all here. The quiet, the earth shattering, groundbreaking, wondrous work of five years has all been given its just display in this collection. The passion of the creators is utterly clear. This is BSG at its most action- packed, most challenging, most majestic and most thought provoking.

Looking back at the series, this is what it was all about and boy- was it ever worth it.

With its release on the Nintendo 3DS and 2DS on Saturday, "Pokemon X & Y" has revitalized a Nintendo handheld...