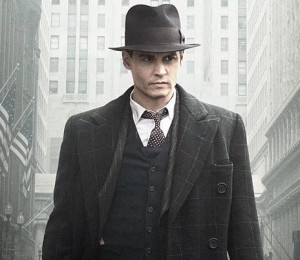 Movies based, even loosely so, on true stories are an ambitious undertaking. There is the pressure of weaving in the requisite Hollywood elements without jeopardizing the taleâ€™s authenticity and the great onus of gripping the viewers. That is, keeping an audience interested and uneasy throughout, even though a good portion of them went into the theater knowing how the story goes.

â€œPublic Enemiesâ€ succeeds, for the most part. The highest compliment to be paid to the Michael Mann film about John Dillinger is that it doesnâ€™t drift too far from the script. The script being the actual story of the infamous Depression-era bank robber.

If youâ€™ve never heard of Dillinger, a quick synopsis: He was the quintessential charismatic crook; a smooth heist artist whose legend grew as his rap sheet did. He was gunned down by the FBI in 1934.

Dillinger (Johnny Depp) is immediately viewed and accepted as the good bad guy, falling between Robin Hood and Scarface, but closer to the former. He shows warmth and honor and even becomes a sympathetic figure at some junctures. Still, Mann avoids the common pitfall of having the villain exhibit admirable traits without them being balanced or even washed out by the negative. Rarely is the audience allowed to lose sight of the fact that Dillinger was, in fact, a thief and murderer. His relationship with girlfriend Billie Frechette (Marion Cotillard) was overplayed â€“ which is to be expected in a movie adaptation â€“ but not to an overwhelming extent or to the point where it hindered the plotâ€™s progression.

The acting, though far from stellar, was decent. Depp, who has found a niche playing eccentric and multi-layered characters, put forth a good performance. As did the supporting cast of criminals, including Stephen Graham (Baby Face Nelson), Jason Clarke (John â€œRedâ€ Hamilton) and David Wenham (Harry â€œPeteâ€ Pierpont).
Universal erred in casting Christian Bale as Melvin Purvis, the FBI agent who hunted Dillinger. Try as he did, Bale, a Brit, could not pull off the South Carolina accent required for the part. It wasnâ€™t silly like the Batman voice (few things are), but he was off-target. Billy Crudup tried too hard â€“ overacted, appearing robotic â€“ and came up short in his portrayal of J. Edgar Hoover.

Most glaring was Cotillardâ€™s attempt to sound like an American. The French actress is an Academy Award-winner for her role in the foreign film â€œLa Vie en rose,â€ but having her try to come off as a Midwesterner was tantamount to jamming a rectangle into a triangular peg. Even if that rectangle is a gold brick, it doesnâ€™t fit.

Her execution of the lines was solid and she succeeded in coming across as a likeable, relatable character – at times the voice-of-reason, at times the delicate Yin to Deppâ€™s Yang, and a couple times the chick down to ride for her man, Ã  la â€œPatricia Arquetteâ€ in True Romance. Nevertheless, the question comes up: â€œDoesnâ€™t she sound like a European woman impersonating an American?â€

In addition, the auxiliary characters â€“ and there are plenty â€“ arenâ€™t introduced or developed, making them hard to follow, remember or to even recognize as theyâ€™re being hunted and shot down. What results is the viewer thinking, â€œOK, itâ€™s Dillinger and a bunch of other old time gangsters.â€

The movie does regain points from its action sequences, which is where much of the $80-million budget went. There are enough shootouts, jailbreaks, car chases and robberies to appease even the viewers who just paid to see Model A Tudors get sprayed by Tommy Guns. In a couple scenes, particularly the shootout at the lodge, the camera work is brilliant in its closeness and simplicity as it creates an almost first-person effect.

As well, the actual story wasnâ€™t bent much to accommodate the film and it was adapted from Bryan Burrough’s book â€œPublic Enemies: America’s Greatest Crime Wave and the Birth of the FBI, 1933â€“34.â€ Which means they held back a little where many other productions would have poured on the maudlin like ketchup.

Overall, â€œPublic Enemiesâ€ is a good and enjoyable movie; certainly not one of those flicks youâ€™ll likely forget you saw come autumn. It falls well short of great, but is worth the price of admission. And its standing is raised by its timing. There arenâ€™t any mainstream movies like it out now and itâ€™s a quality change-up from the sci-fi, cartoon adventure and explosion-filled-substance-lacking films that typically suffuse the box office during the summer.

Johnny Depp proves throughout the movie that he shares with Dillinger much more than his given name. Just like the real life character, he lights up the screen with the angst and remorselessness when robbing banks at a gun point, shooting officers, disarming cruel prison guards and beating up bossy old men in allegedly high-class places such as cloak rooms.

Yet, his softness and charisma are eye-watering when it comes to seducing young women, helping exploited impoverished workers keep their money from giving them over to the corporations, watching his loved one being harassed by the authorities and displaying his affection toward the poor.

Since John Dillinger is an alleged womanizer, the theme of the female sex is persistent throughout the entire movie. It is the French-Canadian torch singer with Native American blood, Evelyn â€œBillieâ€ Frechette, who captures his heart and softens it, in a sense. She is the one in front of whom the otherwise clandestine outlaw reveals his true identity. She is the one because of whom the otherwise insensitive Dillinger sobs for the one and only one time throughout the entire movie.

Riveting, sexy, poignant, realistic and sad- these are but a few of the words describing â€œPublic Enemies.â€