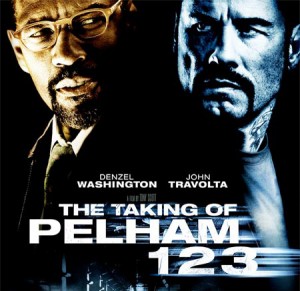 You usually don’t come across an action film that relies more on the strength of its characters than the action itself, but that’s exactly the case in â€œThe Taking of Pelham 123.â€

Relying heavily on strong performances from Denzel Washington [Training Day, Remember the Titans] and John Travolta [â€œBroken Arrow,â€ â€œGet Shortyâ€], â€œThe Taking of Pelham 123â€ manages to break the mold of the action genre, utilizing a realistic script and equally as earthy action, making it a less spectacular, but nevertheless entertaining addition to theaters this summer.

Because of this, it’s more intriguing and surreptitious than jaw-dropping, making it difficult to recommend to those looking for spicy and over the top action.

That doesn’t mean it isn’t a worthwhile piece of cinema.

The star power doesn’t end with Washington and Travolta however as the supporting cast is filled with talented and capable actors. John Turturro [â€œDon’t Mess With the Zohan,â€ â€œThe Bronx is Burningâ€], Luis Guzman [â€œCount of Monte Cristo,â€ â€œAnger Managementâ€], Ramon Rodriguez [â€œTransformers: The Revenge of the Fallen,â€ â€œPride and Gloryâ€] and Michael Rispoli [â€œInvincible,â€ â€œThe Sopranosâ€] give the film a well-rounded feel and allow the plot to progress without having the film’s two stars glued to the screen for every second.

The same thing goes for the performances of James Gandolfini [â€œThe Sopranos,â€ â€œAll the Kings Menâ€], who nails the chubby version of New York City Mike Bloomberg to a T and John Benjamin Hickey [â€œFlags of our Fathers,â€ â€œThe Bone Collectorâ€], who plays the deputy mayor who seems better for the mayoral job than his boss.

In spite of their on-screen prowess however, you’ll be begging for Washington and Travolta to continue their journey together. That in a sense is what â€œThe Taking of Pelham 123â€ is all about.

It is on the strength of these two actors that the film is able to fight its way above the mediocre and give the story the charisma it needs to survive. Making the viewer feel that the situation Washington finds himself in could happen to anyone, â€œThe Taking of Pelham 123â€ achieves its goal in making for a compelling work of cinema. Through Washington’s interaction with Travolta, it’s easy to see what director Tony Scott’s[â€œMan on Fire,â€ â€œDominoâ€] message was here- the separation between good and evil is such a minuscule one that its a waste of time to pick sides- one can find themselves on either side at the drop of a hat.

Seeing the interaction and banter of Williams and Travolta throughout the movie, with millions of dollars and over a dozen people’s lives at stake simply confirms this and keeps us awaiting for the climax where it comes to an end. The action may be free of super thrills, but it is realistic, yet unpredictable, making it different from the plethora of cookie cutter action flicks to grace theaters over the past few years.

Is it the new â€œTraining Dayâ€? No, but it’s far from anything along the lines of â€œCrank,â€ or â€œJumper.â€

As a matter of fact, it’s heart of the film that ends up breaking the stalemate when the action isn’t as enthralling as it could have been. Because of that element alone, it’s a different kind of movie. While it lacks the flash and whistles needed to be considered a sure-fire hit and get on the express track, it manages to make all its stops on time and does so in a timely and engaging manner.