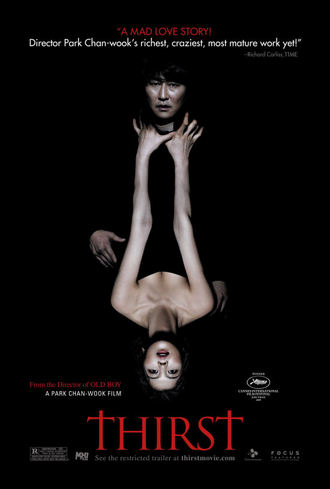 â€œThirst,â€ a new South Korean film from Focus Features and CJ Entertainment, is an insane romp through the un-life of a new born vampire in un-love.

A beloved Catholic Priest, Father Sang-Hyeon, played by South Korean actor Kangâ€“ho Song (“The Host,” â€œSympathy for Lady Vengeanceâ€) volunteers at a small town hospital wanting nothing more than to save people from death and suffering. Electing to become a test subject in a radical anti-viral experiment hoping to help stop a deadly disease, he falls grotesquely ill. In his final moments, he is given an emergency transfusion of blood. Despite this, he dies on the table, yet he is still talking.

Six months on, now clad in bandages and worshiped as a living saint, Father Sang-Hyeon endures the desperate masses that believe him a living miracle. Returning to his volunteer work, he reunites with old childhood friends, namely the lovely, but cold Tae-Ju, played by Ok-vin Kim. As the good Father comes to understand the horror and wonder of what he has become, a supernatural longing for Tae-Ju, along with her own seething hatred of her loveless marriage, grows uncontrollable.

Director Park Chan-wook, the famed director of 2003â€™s revenge epic â€œOldboy,â€ has written and directed his own seductive twist on popular vampire lore. Why, he asks, must the hero be a man of faith? In this film,Chan-wook presents the righteous crusading lead character as the vampire himself. The conflict naturally sets the stage for all kinds of nasty drama.

â€œThirstâ€ is nasty. By no means is this movie for the kids and is rated R for good reason. Without devolving into pornography, Chan-wook shows no fear in keeping the focus on the action. Where other directors would choose to cut away from the wet sopping mess of a sex scene or bloodletting, this one doesnâ€™t blink.

The film is populated with the dead and dying. All the ins and outs of horrible, legion-inducing, blood vomit busting viruses come into play. From the domestic tension of Tae-Juâ€™s miserable home life to the rapture of leaping over nighttime rooftops, the film has freakish balance between humor and horror. Though, much like the main character, the movie itself has something of an identity crisis. One minute itâ€™s about a religious man questioning his faith. The next minute it is a family drama rife with sexual repression only to transform into a pitch black romantic-comedy crossed with a murder mystery.

These shifts in storytelling can be jarring but give the film new life in an otherwise well-worn genre. Perhaps it could work without the added element of vampiric bloodlust, but it would rob its ghoulish charm. The stars do their job well, changing and shifting with the events of story with ease and conviction. An achievement, indeed, considering the absurd nature of some these same events. Weâ€™re talking some “tongue in cheek” moments here. The film is aware of the innate humor of it all. These are welcome moments that break up the dire melancholy.

Ultimately, â€œThirstâ€ engenders real drama while smacking you unawares with genuine hilarity and buckets of blood and sick. The movie is anything but gratuitous. Smartly written, directed and acted, the film is about lust and love in a world gone mad. Itâ€™ll leave couples with a lot to talk about. Perhaps not the usual date movie fare, but there is plenty here to keep genre fans and general movie goers happy if they can stomach this wicked fairy tale.

Review Fix chats with playwright and singer Mary Elizabeth Micari who discusses Grannyâ€™s Blue-mers II: Down in the Alley! About...