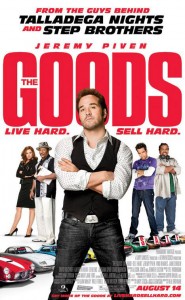 Selling cars is the mission.

How you sell them is another story.

â€œThe Goods: Live Hard, Sell Hardâ€ takes a page from this montra and tries to manufacture explosive laughs anyway possible. The only problem is that the plot is weaker than a nilla wafer and it’s main star isn’t quite ready to be a headlining star.

After this film, you wonder if he ever will be.

Don Ready, played by the usually-charming and hilarious Jeremy Piven [Entourage, Judgement Night] is a smooth talking car salesman addicted to hookers, with the singing voice that would make you wonder if he made a deal with the devil. After being called in to attempt to save a dealership, struggling with bankruptcy, he gathers his best recruits and is prepared to do battle and sell cars in order to keep the business going strong.

If this sounds more like a recurring skit on ’80s SNL than the plot of a feature film, that’s OK.

That’s what this film should have been.

Even with a formidable supporting cast such as Ving Rhames [Undisputed, Con Air], and Ed Helms [The Hangover, The Office] this film does not have the formula to stir up a buzz. The laughs just don’t palpitate at a consistent enough pace throughout the film for it to be a success. Piven’s humor does tend to spice things up a bit, but he can’t save this film by himself, proving he doesn’t yet have the adequate presence and star power to survive as a headlining star.

Will Ferrell on the other hand, does. In a small cameo, the comedy veteran brings a ton of laughs to the screen.Â There’s a scene that has him jumping out of a plane which is especially hilarious. Let’s just say it was not raining female sex toys.

Aside from that scene, the memorable jokes are slim to none. It seemed as the directors believe that cursing was going to create the humor this picture needed to be enjoyable.Â Even though at times it was fun, the majority of the experience felt quite boring.Â The key to a good comedy is creating a smart script ,which will cause people to laugh for a majority of reasons. This is where â€œThe Goods: Live Hard, Sell Hardâ€ fails miserably.

It was like having to forcefully choose between spaghetti with no marinara sauce, a hot dog with no mustard and fries with no ketchup. The end result is a disheartening and empty taste.

In the end, that’s the price one pays when trying to do too much, which ends up being a recipe for disaster, rather than success.