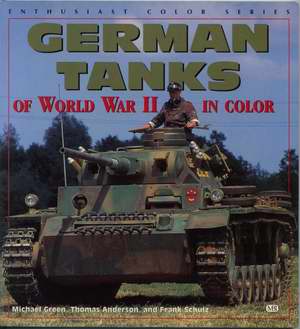 If youâ€™re a fan of German World War II fighting vehicles, you know that wartime color photos of them are fairly uncommon. Even when you do find wartime color photos, they tend to be blurry or contain pigment errors due to the quality of early color film.

â€œGerman Tanks of World War II in Colorâ€ contains dozens of photographs, of all the main Panzers that equipped the Wehrmacht and SS Panzer divisions during World War II. This is done by photographing surviving vehicles in museums, fully restored and operational examples in private collections and select wartime or immediate postwar color photos.

Studying German tanks can be a little daunting at times. For every mark of tank â€“ the Panzer IV especially â€“ there are numerous subtypes. The Panzer IV ran from models A through J and all have different combinations of armor, engines and guns! If youâ€™re looking for a precise breakdown of the various makes and models, this book is not for you.

What you will find are excellent summaries of all the main German tanks, assault guns, armored cars and half tracks. Nothing is overly detailed, but it’s definitely enough for the reader to figure out what model and major subtype theyâ€™re looking at.

While this book is light on text, the real heart and soul of this work lies in its photographs. Page after page is covered in phenomenal detailed photos of various tanks.

Photos include those wonderfully restored vehicles from museums around the world, including the Bovington Tank Museum in the U.K. and the U.S. Army Ordnance Museum in Aberdeen, Maryland. Also highlighted are fully running examples with stunning and accurate color schemes from private collections.

The photos are clear, crisp and up close. Details of the various tank’s, armor, tracks, bogie wheels, armament and other equipment can clearly be seen. These photos are indispensable to scale plastic modelers who need these detailed photos for their projects.

Some photos are of incredibly rare vehicles and variants. One of the worldâ€™s only two remaining â€œElephantâ€ tank destroyers is shown. While this example has been left outside for decades and isnâ€™t painted in an accurate scheme, there are nice closeups of it, and those are generally lacking in wartime photography.

Michaels even includes some lesser-known vehicles such as the various foreign tanks utilized by the Germans to make up for an acute tank shortage. He discusses and shows various Czech and French tanks that the Germans made use of or converted in the early years of the war.

This is one of the handiest references on German armor around. Itâ€™s great for those looking to get their feet wet on the topic, or those who may not have the funds for much larger works that contain more technical data.

Considering that it can be found for under $20 at most major bookstores (most Barnes & Noble or Borders have one or more copies on hand), â€œGerman Tanks of World War IIâ€ makes for an excellent piece of eye candy for your library.