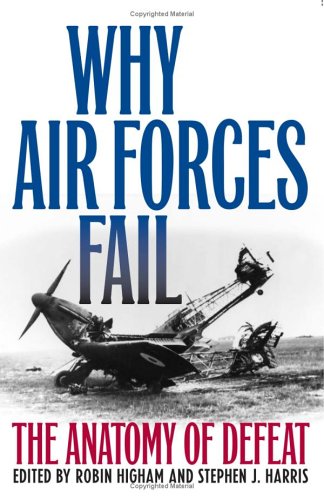 It takes great drive and a strong effort to build an effective air force. Unfortunately, it often doesnâ€™t take much to ruin one. â€œWhy Air Forces Failâ€ is a collection of 11 essays on specific air forces, which details how and why these air forces met with defeat, either temporary or permanent. Large air forces such as the British Royal Air Force (RAF) and German Luftwaffe are covered, as well as the smaller services of Poland, Egypt and Argentina.

The overall quality of writing is very good. Keep in mind that itâ€™s a work with contributions from multiple authors, so everyone brings their own writing style to the table. Nothing strikes the reader as hard to understand or follow smoothly.

Each essay is written by a different author, in some cases are well-known authors in their specific field of study. Most of the 11 essays are excellent, but a few are just good and one or two will make you wonder why theyâ€™re even included.

For example, the essay on the Arab air forces isÂ  skimpy on reliable information, and many of the conclusions are questionable. The Saudi Arabian air force is given a positive nudge, even while its performance during the 1991 Gulf War is highly suspect.

The essay on the Russian air forces isnâ€™t so much bad (itâ€™s not) as it is too broad. It covers World War I briefly and covers the Soviet Air Forceâ€™s rise, fall and resurgence to aerial supremacy in World War II. A more focused summary could have been more effective (i.e., pick only the one or the other). That, or an individual work on the subject.

Essays on some of the lesser-known air forces are fantastic. The Italian Regia Aeronautica during World War II is covered, and the information is very insightful. We can see how the politics and mismanaged industry kept the Italians years behind where they needed to be technologically.

The essay of the Argentine air force is phenomenal. Itâ€™s the only essay in the book that details how air power alone almost won this conflict if not for politics and better-trained British forces. It also covers the skill and endless difficulties the Argentine Air Force had to deal while detailing how it came close to victory.

All and all, this is an extremely interesting read. Some have complained that the essays are too isolated, or that they donâ€™t tie in the lessons from one essay with another, or that it doesnâ€™t cover the whole subject of why air power hasnâ€™t won a war on its own. But this book isnâ€™t a work of air-power theory: Itâ€™s, as the title states, Why air forces fail, not why air power in general can fail.

It has its bones of contention, and the reader may not agree with all the findings depending on his or her preference, but that is one of this book’s strengths. Again, it has one or two weak essays, but the quality of the others more than makes up for this.

This is a solid work for anyone wanting to learn why air forces, including those held in high esteem, can fail or have suffered a harsh learning curve. Itâ€™s excellent in that it covers multiple histories not usually found together, which is convenient compared to finding multiple larger works.