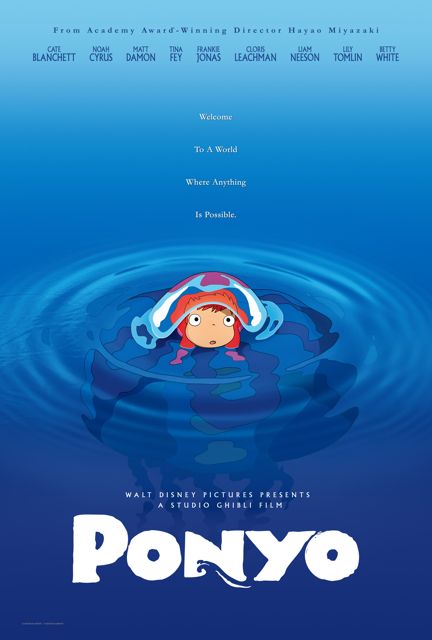 The artistry and style of Japanese animated films are a world away from American animation. The existence of hand-drawn animation has dwindled with respect to the rise in computer animated films and the huge following they have created in the United States. During the transition phase from hand-drawn to computer animation, Japanese animation has blossomed into its own artistic niche that is immediately recognizable by the colors and shapes of the characters. The newest addition to the films that Disney is bringing to the U.S. from Japanese writer/director Hayao Miyazaki (â€œSpirited Away,â€ â€œPrincess Mononokeâ€) is â€œPonyo,â€ the animated film featuring a star-studded voice cast including Liam Neeson and Cate Blanchett.

The opening sequence of â€œPonyoâ€ is a beautiful dance of sea creatures and plant life without dialogue, which makes for a beautiful and mesmerizing underwater scene. This leads us into the life of a half-girl, half fish creature that is eager to mix with the world of humans, going against her fatherâ€™s rules and finding her way into a little boyâ€™s beach pail. Sosuke (voiced by Frankie Jonas) is the little boy who becomes endeared with a goldfish he finds and names Ponyo. Sosuke lives in a picturesque beach house on top of a hill with his mother, who works at a nursing home, and his father, who is away working on ships.

Liam Neeson, who brings depth to his roles in film, is also a great voice talent, as is evident in â€œPonyo,” as the voice of Fujimoto, the controlling, magician father of Ponyo. When Ponyo transforms herself into a full-blown human girl and finds Sosuke, Fujimoto and â€œsea queenâ€ mother decide the only way she can stay human is if Sosuke can prove his love for her (even though they are only children). The storyline is clearly influenced by Disneyâ€™s â€œThe Little Mermaid,â€ but because the main characters are supposed to be five years old, it takes on a more innocent level like that of â€œPinocchio.â€

However, the reason â€œPonyoâ€ doesnâ€™t exist as a carbon copy of those stories is because the film focuses more on the visual elements and quirky characters than trying to tell a moral tale for children. â€œPonyoâ€ is definitely aimed at a younger audience, and can be enjoyed by children as young as five, but because the story is fun and the animation is beautiful, it can be enjoyed by people of all ages.

Nonetheless, the pacing of the film is somewhat slow because there are a lot of scenes which seem to exist just for the visual element, as in one scene where Lisa is driving Sosuke through a storm as the water races next to their car with Ponyo running atop the waves, trying to catch up with them. Another trait of Japanese animated films is that for some reason they overuse the character names, as Ponyoâ€™s name seems to be called out every few minutes of the film, creating dialogue that at times can be overly verbose and annoying.

Those quirks aside, the film runs a tad too long for little ones to watch in the theater, but is a great film to bring home once it is available on DVD. Ponyo as a fish, and then later as a human girl, has a cute factor that kids will love, and she has an impulsive magical nature about her that they are sure to be fascinated with.