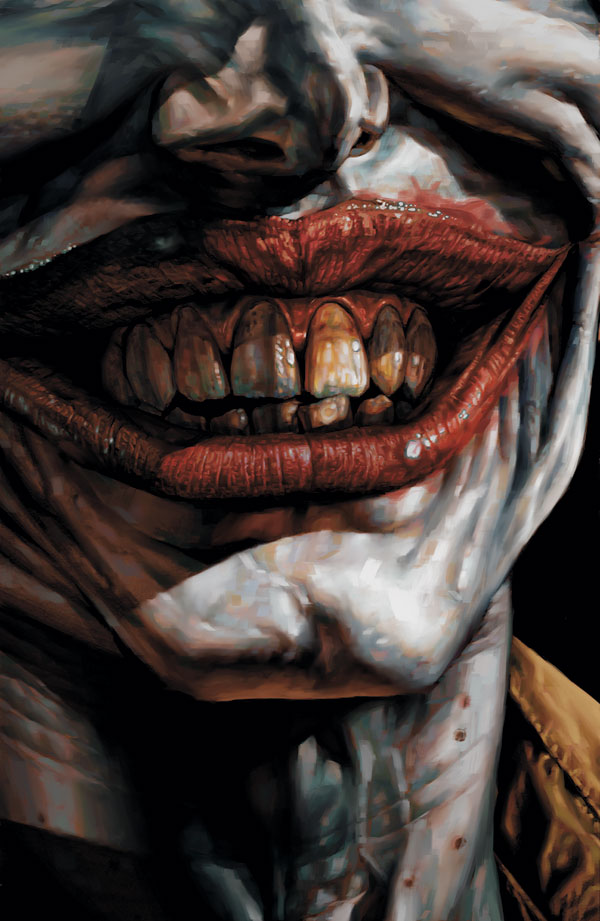 The vivid cover art of Brian Azzarelloâ€™s â€œJoker,â€ published by DC Comics, says everything about the bloody tale of disorder and depravity.

Reeling from news that the Joker is being released from Arkham Asylum, Gotham City is in utter peril. This is a sick, twisted affair, and the titular madman is at the heart of that illness. Artist Lee Bermejo and author Azzarello confidently tackle the raw and vile events surrounding the unthinkable return of the fiendish mastermind. Similar to their fascinating work on â€œLex Luthor: Man of Steel,â€ the story is from the other side of the aisle.

A two-bit hood named Jonny Frost, whoâ€™s eager to get in on the action, is our guide. Meeting the likes of Killer Croc and Harley Quinn would make anyone else think twice, but for Jonny, there is nothing he wants more. Jonny soon learns that tearing through Gotham with the Joker is a dangerous proposition. With every obscene act, Jonny gets closer to becoming the big shot he always wanted to be. This is all too alluring for a man starving for some control â€“ Jonny recognizes himself in the Joker.

This is where the story lives. Unapparent on the first read through, this flip in perspective makes â€œJokerâ€ a valuable portrait of the twisted trickster.

Nothing in the narrative is all that interesting, and frankly you may not like Jonny all that much. He is just another guy, nobody playing at being somebody, and he is in over his head. This is also the bookâ€™s strength. Being that Jonny is not larger than life, we get a real glimpse at why the Joker does what he does. We learn this Joker isnâ€™t the manic prankster from the cartoons, nor is he the homicidal anarchist made popular on the big screen; Azzarelloâ€™s Joker is all of these and a little more. This keeps the pages turning, the underworld scared and Jonny spellbound.

Getting a little too close for comfort, youâ€™re liable to gag even as you lavish over page after page of the grimy strip clubs, frigid meat lockers and slimy bedrooms of Gotham. The art is putrid and disgusting in the most appropriate way possible. Two-Faceâ€™s mangled face, Crocâ€™s urban makeover and even the Riddlerâ€™s pimped out entourage seem to fit this gangland rogueâ€™s gallery. There is sharpness to the illustrations that cut into you like a rusty knife. It is dirty fun looking at Bermejoâ€™s work.

Though â€œJokerâ€ is an original story, it is hard not to draw parallels between this and last yearâ€™s film â€œThe Dark Knight.â€ Published before that filmâ€™s release, it is at least a spiritual companion to the cracked and unflinching realism present in the current Batman film mythos. Making connections in this regard might make this more or less fun, depending on your tastes.

Jokes have a surprise in the end, a few funny pictures that get you to see things a little differently. No surprises here, but you do think differently about the Joker, a disease at its most dangerous, and the Batman, next best thing to a cure.

An uncompromising look at the fandom the iconic villain has garnered over the years, â€œJokerâ€ feels like picking at a scab, with a little bit of puss and a little bit of hurt as your reward in the end. If the Joker is your kind of murdering sociopath, then this book does the fiend justice.