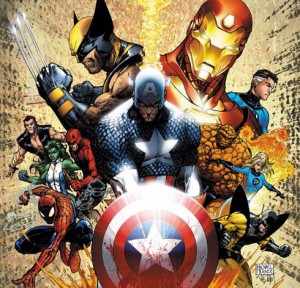 For a large portion of their existence, comic books have been labeled as childish, unbelievable and out of touch with reality, just to name a few. That cynicism is part of what makes “Civil War” so outstanding.

Would society let a bunch of costumed ideologues with superpowers run around wild with no local or government supervision? What if it was for the greater good? What if there were an equal number of dangerous thieves and murderers? Wouldnâ€™t they then be necessary?

In “Civil War,” Marvel has injected politics into the already complicated world of superheroes and, much like in real life, loyalties become split, ideologies come to the forefront and lines are drawn in the sand.

Marvelâ€™s choice of pitting Iron Man, the forward thinker who believes that technology, change and immediate action are the way of the future against Captain America, the American Dream from a simpler time who believes that solid values, fairness, sacrifice and a hard set of fists will always trump the day.

While these two have been extremely close friends through most of their history, theyâ€™ve been known to bump heads on occasion. (See “Iron Man: Armor Wars.”)

Both characters play off of each other very well, while the other heroes also match the sides theyâ€™ve chosen. Captain America attracts the more traditional or free-spirited heroes, while Iron Manâ€™s side is made of progressive and intellectual heroes. Both sides attract or utilize some very unorthodox members in order to get the upper hand over one another.

“Civil War” is a collection of six issues of the same name. The story takes off literally within in the first few pages. The writers have to cover a lot of ground in a limited amount of pages, so “Civil War” is a tad low on suspense. In fact, it comes off as a little rushed at times. Still, the writers managed to fit quite a few twists and turns, which is no surprise considering the awesome number of characters involved. Cameos abound!

The entire “Civil War” storyline unfolded through dozens of issues in multiple titles, and getting the entire saga can seem a bit daunting. So keeping this is mind, the “Civil War” graphic novel only tackles the â€œbig picture.â€ Other graphic novels and collections cover other aspects of the story, so have no fear.

All that taken into account, “Civil War” is amazingly original. The flow of the story is very smooth and is not hard to follow at all. Conveniently, Mark Millar hasnâ€™t used too much back story or minutia in regard to the various characters. Anyone vaguely familiar with Marvelâ€™s big names will feel right at home.

The artwork is crisp, the characters well-drawn and the backgrounds subdued. The use of detailed facial expressions, particularly those of Captain America, add to the depth and emotion of the book. Characters who have important cameos also have beautiful splash pages when they hit the scene.

“Civil War” was one of the biggest comic sagas in recent years. Well-written and spanning all of Marvelâ€™s big titles, it was truly epic and full of originality. Thatâ€™s something that can be hard to inject into decades-old characters.