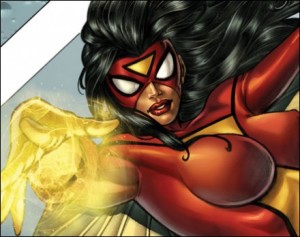 Itâ€™s episode five of Spider-Woman â€œAgent of Sword,â€ and this issue packs a wallop. Jessica Drew (Nicolette Reed) finally comes face-to-face with the Skrull she has been hunting and gets the answers sheâ€™s looking for, and it isnâ€™t pretty. As usual, Brian Michael Bendis combines the trauma of Jessicaâ€™s ordeal during the Secret Skrull war with biting, witty dialogue.

This showdown reveals the simple truth about Spider-Woman. As an underrated character in the Marvel Universe, it is revealed why the Skrull Queen took over her identity. The one thing the Skrull race was sure of was that Jessica Drew wouldnâ€™t be missed. As that revelation comes to light, the real Avengers come in to show just how wrong that Skrull was. Yes, was, since, as Wolverine (Jeffrey Hedquist) says, â€œWe take care of our own,â€ as he proceeds to help Jessica handle the alien threat in his subtle fashion. As usual, Spider-Man is written not just for comic relief, but to point out irony and to intelligently add levity to a tense situation. Then thereâ€™s Captain America being his usual man-in-charge self, and Luke Cage being Luke Cage. But itâ€™s Carol Danvers (Ms. Marvel) who has been Jessicaâ€™s friend, and offers a tender moment amid the chaos.

On the plane ride back from her most recent adventure, Jessica and Wolverine have a heart-to-heart and reminds her that heâ€™s â€œstill the most screwed over person in the history of the universe.â€ As this mission comes to a close, Jessica receives a message from Brand, who has a plethora of issues for Jessica to sink her teeth into.

The artwork of Alex Maleev is once again top-notch, as we can see every moment of Wolverineâ€™s life etched on his face the same way in which we see Jessicaâ€™s trauma embedded in her soul. Itâ€™s hard to look into her eyes and not feel the pain of not knowing who to trust â€“ even with the assurance of Wolverine. The voice work of the actors plays well alongside the action packed scenes; with every grunt, scream and whispered emotion, they set the right tone.

The thing about this ongoing series is that even though Jessica gets the answers sheâ€™s looking for, there are still many unknown factors involved. Wolverine says he knows Brand (the woman who Jessica reports to), but that isnâ€™t necessarily a ringing endorsement coming from a man who is still worse off than a woman who was impersonated by an alien and imprisoned for a long period of time. In the upcoming episodes, it will be interesting to see how this storyline unfolds. At least Jessica wonâ€™t be alone this time, since she just might have a little help from her friends.