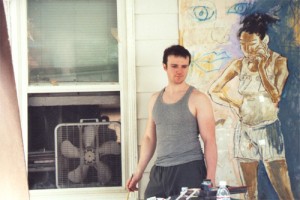 In every facet of media, there are individuals who strive to be different. They push the envelope and set trends that forever cement their reputations in the industry they work in and create a legacy for all those that follow after them.

In the world of comic books, David Mack is one of those individuals. Using watercolors and collage effects to depict the characters he draws, rather than the standard method of pencil and ink, Mack changed the comic book world forever when he drew the Daredevil â€œWake Upâ€ series in 2002.

Often referred to as the most significant Daredevil run since the years of Frank Miller, comic books fans saw just how different a comic book could feel when Mack told the story with his brush.

The â€œWake Upâ€ series also gave Mack a chance to work with his best friend of over 13 years, Brian Michael Bendis, who wrote the story.

â€œIt was a delight to finally work on a project worthy of our friendship,â€ said Mack via e-mail. â€œWith a story that we could really collaborate on; now that we had honed our skills more, on a story with themes that are personal to us.â€

After the â€œWake Upâ€ series became a hit, many comic fans, unfamiliar with Mack, considered him an overnight success, not realizing that Mack had been in the industry for over 10 years. In fact, Mackâ€™s creative juices had been at work since he was a child.

â€œIâ€™ve just made things all my life; in a variety of media.Â My mother probably had the biggest impact on that, as she was encouraging of the things I did as a youngster,â€ said Mack. â€œMy mother was my biggest artistic inspiration. The skills that she taught me as an infant are skills that I use each and every day of my life; in and out of work. She always had a variety of media around for me to make things out of.Â She was a first grade teacher, so there was no shortage of scissors, markers, crayons, clay, tape, and staplers for me to make things with.â€

Having an encouraging influence proved positive for Mack, as by the age of 16 he had made up his mind that he wanted to work in the comic book industry. Mack soon crossed paths with other comic book writers and artists such as Brian Michael Bendis, Andy Lee and Michael Oeming (Mack considers them great colleagues and friends), thus lighting a fire within Mack.

By 1993 he began working on his acclaimed series, â€œKabuki.â€

â€œI decided that I wanted to create a comic book in which I could incorporate all of my personal philosophies, my passion for learning and integrate my everyday personal experiences.Â I loved autobiographical comics, but I wasnâ€™t yet comfortable with that idea. I wanted to tell personal truths, but at a distance; through the un-self-conscious comfort of a veil,â€ said Mack.

â€œBut I did not want to fall into the trap of making the main character an idealized version of myself.Â So I decided that I would make all of the surface details very opposite, and that way the universal truths could shine through and I could tell the story through metaphor.Â This way, instead of reading the story and seeing me, readers could find their own personal relation to the story and see themselves.Â So I made the main character the opposite gender.Â I set the story in a different part of the world, with a different language, different history and different culture. Much of the first Kabuki story is me as a 21-22 year old dealing with the death of my mother, just as Kabuki is coming to terms with the relationship and death of her mother in the story.â€

For most writers, having a story take place in a different part of the world would require months of research and reading, but considering that Mack fell in love with Japanese culture in college, studying the countryâ€™s language, mythology and history, Mackâ€™s â€œKabukiâ€ looks and reads like a comic dripping in Japanese culture. Given how much he learned in college, Mack knows just how important his college days were in furthering his career.

â€œTake advantage of the amazing opportunities that college and life opens up to you. There is a wealth of subjects and knowledge and helpful teachers that you can glean inspiration and skills from and then apply that directly into your work,â€ said Mack. â€œInvestigate everything, keep what resonates with you, and funnel that into your work in a way that fits your point of view and enriches your work.Â The biggest point of advice, I can give is to just do it.Â In the process of doing it, you figure out how to do it, and what you want out of it.â€

Through Kabuki and the world of comic books, Mack has not only dealt with the death of his mother, but has carved himself a niche in the comic book industry that is totally his own.

In a day where each comic book writer and artist has their own distinct style, Mackâ€™s use of incorporating real life issues in his comics, combined with the use of watercolor and texture that bring his creations to life like no other artist in the industry right now, Mack is in a league of his own.

This article was originally published in December 2005.

Check out this weekâ€™s Review Fix Pro Wrestling Power Rankings to see who earned headlines in and out of the...