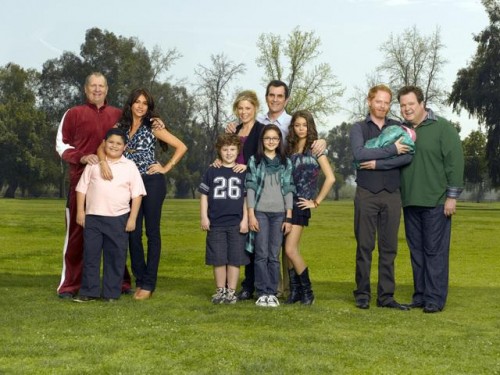 What’s the key to being a good dad? Is it allowing freedom? Having patience? Being their friend? Placing emphasis on education? Is it simply allowing them to be themselves? The parents of each “Modern Family” are asked that question at the start of the second episode. As Phil replies, exasperated from his wife’s meddling interjections, we start to see the ties to our own frustrated desires.

All parents eventually deal with the trouble of determining whether or not they are doing a good job â€“ and the four patriarchs of â€œModern Familyâ€ enact this concern hilariously.

Jay is preparing to whisk Gloria away to the wine country, while her son Manny’s much-esteemed biological father is to take him to Disneyland. In the meantime, Jay is supposed to show Manny how to install a ceiling fan in his room to foster a sense of togetherness as well as show the merit of hard labor.

To say they don’t get along would be putting it lightly. Aside, Jay soon reveals that Manny’s dad is a flake and that “Superman can’t drag himself away from the craps table, and [he’s] the jerk.â€

Mitchell and Cameron bring Lilly to a play group where they think they are the only gay couple. Mitchell, as usual, is stressed out over this fact. Cameron continues to stress the need to be themselves, even raising that point ad nauseam during the initial cutaway query.

As soon as they walk in, Mitchell starts with the omnipresent stink eye as Cameron tries desperately not to respond inappropriately when informed that the other parents are engaged in “taking turns blowing bubbles.”

“How nice… for the babies.”

Phil and Claire tackle both the new promiscuous divorcee on the block as well as Luke’s inability to take good care of his property. A large focus of this episode is Phil’s desire to get Luke a new bike so bullies don’t mock him for having his girly older sister’s wheels. He purchases it, gives it to him and wishes him well, only to find what he thinks is Luke’s bike unchained in front of a store minutes later.

To steal the bike â€“ and accidentally ride past the sultry temptress who has conveniently locked herself out of the house. Trouble brews faster than the espresso for your latte.

Again, all three families are woven into the tapestry of everyday chaos: Jay has to deal with the crumbled dreams of a child that isn’t his. Mitchell and Cameron must come to terms with their personas as gay parents. Phil and Claire engage in the typical misgivings that tried-and-true married couples do â€“ hiding things from each other, being attracted to other people and other domestically delightful dilemmas.

Just as fiery momma Gloria points out when describing her two favorite Latino comedians, “They make you laugh, but they also make you think.”

In the first episode, the kids’ comebacks shone. The surprising scene-stealer in “The Bicycle Thief” is Cameron. Desperately wanting to dance, Mitchell suppresses his every whim. He makes small talk, trying not to let on to the fact that they’re “too gay.” Even as the credits roll, he hearkens back to his earlier Meryl Streep discussion, going on a deluge about a now apt Sophie’s Choice reference. His repressed self and resulting awkwardness is more than just funny; it’s honest.

So what is the key to successful fatherhood? Jay sums it up at the close of the show. “The key to being a good, dad? Look, sometimes things work out just the way you want. Sometimes they don’t. Youâ€™ve got to hang in there, because when all is said and done, 90 per cent of being a dad is just showing up.”

As much as we may try to deny it, this is a wonderful glimpse into what happens every day around us. This show is an extended conversation you’ve eavesdropped on in the supermarket, only funnier.