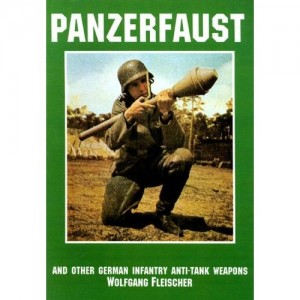 Wolfgang Fleischer, a prolific writer on German military equipment has done something special, cataloguing one of the most diverse arsenals of anti-tank weaponry, in remarkable detail, while providing excellent pictures and using common sense language- all in just 50 pages.

During the Second World War, the military of Nazi Germany ran into a problem: the Soviet Red Army. While the Germans were equipped with a vast array of tanks, the Soviets not only had more tanks, they had superior ones.

The Germans responded with more advanced tanks of their own, and with better anti-tank weapons. Yet they could never match the Russians tank for tank (i.e. 1,347 Tiger tanks vs. 57, 000 T-34s), and even employed large numbers of towed anti-tank guns like the famous â€œ88,â€Â  which proved problematic, since they still required transport and several crew members.

So what was the Germany infantryman to do?

Fleischer begins his story with a brief recap of World War One and how Infantry had to improvise to have any chance against the Britishâ€™s new mechanical beasts (the first tanks). Thus was born the T-Gewehr, the first anti-tank rifle, which was essentially a standard Gew-98 Mauser rifle scaled up to comic proportions. This intimidating weapon at least gave foot soldiers something to fight back with.

While the Germans improved on this concept, the anti-tank rifle was short lived. This is where the book takes off. Unlike the Allies or the other Axis powers, Germany put lots of research and effort to allow their infantry to destroy tanks on their own without relying on solely on heavy crew served weapons.

Fleischer chronicles this by starting with the anti-tank rifles, then moves on to anti-tank mines, smaller two crew anti tank guns; rifle-fired grenades and finally, rockets. He also gives a rundown of man to tank combat on the Eastern Front with German estimates of how many tanks their soldiers where managing to kill.

The issue the Germanâ€™s had was as their anti-tank weapons improved, enemy tank armor was becoming thicker and better designed. They received some inspiration from a new American invention captured in North Africa, the rocket firing â€œbazookaâ€. While the American design had good stopping power the Germans knew it wouldnâ€™t be up to snuff against the new Tiger and Panther tanks they had coming into service. So they copied the design, increased the size of the rocket and the Panzerschrek (tank terror) was born. This heavy weapon could knock out the majority of allied tanks fielded during the war.

A good portion of the book is dedicated to its namesake the Pazerfaust. Meaning â€œTank Fistâ€ the Panzerfaust is the grandfather of all of todayâ€™s disposable, man portable anti-tank rockets. The Germans figured out that you needed a fairly large diameter rocket to kill a tank but anything larger than the Panzerschrek would be pushing the weight a man could carry.

Fleischer describes how the Germans got around this problem and followed the Panzerfaust from drawing board to production line. He also covers all versions of this potent weapon as it was steadily improved throughout the war and was the inspiration for the Soviet RPG (Rocket Propelled Grenade) series.

The author has done truly outstanding job for such a small book. While there may be other more in depth works about the subject this small 50 page works still covers all the basics and more. It is also wonderfully illustrated with great captions. Retailing at around $10 Panzerfaust is a must have for any infantry or tank buffs.