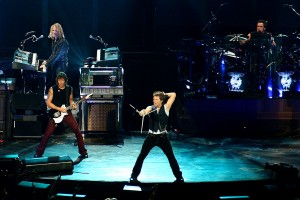 The Jersey band that has been rocking for nearly 30 years is back with their eleventh studio album The Circle. Here Bon Jovi shows why they have survived punk, glam-rock, grunge and the Lilith fair.

Already climbing multiple music charts, this song is classic Bon Jovi. With Jon on lead vocals the rock anthem makes a comeback. What could have been a rehashed version of â€œYou Canâ€™t Go Homeâ€ is saved by the musical arrangement as each band member vibes off the lyrics co-written by Jon and Richie Sambora. In the years theyâ€™ve been a band we have seen their musicianship only get stronger and this song is a prime example of that.

This slow paced, melodic track will lull you to the point where youâ€™ll want to keep this on a continual loop to hold onto the feeling it gives you. Yes itâ€™s that good.

â€œWork For The Working Manâ€

For a band that has made millions and have been around the world, they know how to keep in touch with their Jersey roots. Itâ€™s a shame that Jon Bon Jovi is not as well known for his songwriting skills as he is for being the driving force of this group. The words ring true as he weaves stories of the working man who at some point wonâ€™t â€œbe able to look his family in the eye.â€ These are his people and you feel the connection that he still has with them through his music.

Bon Jovi takes his Superman fascination and makes it into a rocking love song. As in the previous tracks the lyrics and rhythmic arrangement creates a story that your ear will be riveted to, then before you know it the trackâ€™s over. Youâ€™ll want Jon to sing to you: â€œI wish that I could be your Superman tonight.â€

At first listen â€œBulletâ€ sounds like their older tracks, but wait. The harmonies between Sambora and Jovi alongside throbbing percussion and drums make this track worth listening to. Itâ€™s a song about the need to believe in something, but what gives it replay value are lyrics like â€œwhat is the distance between a bullet and a gunâ€ combined with that writhing beat.

You can tell that Tico Torres (percussionist, drummer) had a ball recording this track. His expert playing is the reason why this song is worth listening to. Other than that itâ€™s standard Bon Jovi â€“ well done, but has been done before.

This track is in the spirit of Harry Chapin. Itâ€™s one of those songs that force you to sit and think about where your life is going. Of course itâ€™s done to a rocking beat with tight harmonies, which makes this song another must have.

During the making of this album there must have been a â€œno horrible songs allowedâ€ sign on the studio door because â€œBrokenpromiseland,â€ â€œLove’s The Only Rule,â€Â  â€Fast Cars,â€ â€œHappy Nowâ€ and are well done tracks that showcase Jonâ€™s vocal-range, the guitar work of Sambora, the drum-work of Torres and the keyboard playing of David Bryan. â€œLearn To Loveâ€ is the perfect cap to this album as Jon reminds us that â€œyouâ€™ve got to learn to love the world youâ€™re living in.â€

With so many solid, well done tracks, there is no way that you can only download one song. To get the full impact of this well crafted album you need to hear it as a whole. Once again Bon Jovi proves why theyâ€™ve been around for decades.